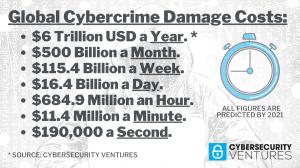 Cybercrime is the world’s third-largest economy after the U.S. and China

Cybercrime is the world’s third-largest economy after the U.S. and China.”
— Steve Morgan, Editor-in-Chief at Cybercrime Magazine

SAUSALITO, CA, UNITED STATES, December 22, 2020 /EINPresswire.com/ — Cybersecurity Ventures predicts global cybercrime costs will grow by 15 percent per year over the next five years, reaching $10.5 trillion USD annually by 2025, up from $3 trillion USD in 2015.

This represents the greatest transfer of economic wealth in history, risks the incentives for innovation and investment, is exponentially larger than the damage inflicted from natural disasters in a year, and will be more profitable than the global trade of all major illegal drugs combined.

“Cybercriminals know they can hold businesses — and our economy — hostage through breaches, ransomware, denial of service attacks and more. This is cyberwarfare, and we need to shift our mindset around cybersecurity in order to protect against it,” says Jack B. Blount, President and CEO at INTRUSION, Inc.

Organized cybercrime entities are joining forces, and their likelihood of detection and prosecution is estimated to be as low as 0.05 percent in the U.S., according to the World Economic Forum’s 2020 Global Risk Report.

If it were measured as a country, then cybercrime — which is predicted to inflict damages totaling $6 trillion USD globally in 2021 — would be the world’s third-largest economy after the U.S. and China.

A report from Cybersecurity Ventures predicts in 2021 cybercrime will cost the world:

Global spending on cybersecurity products and services for defending against cybercrime is projected to exceed $1 trillion cumulatively over the five-year period from 2017 to 2021.

Cybersecurity Ventures anticipates 12-15 percent year-over-year cybersecurity market growth through 2025. While that may be a respectable increase, it pales in comparison to the cybercrime costs incurred.