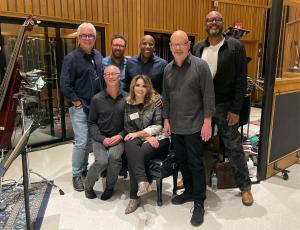 LAS VEGAS, NV, UNITED STATES, June 10, 2021 /EINPresswire.com/ — When the Covid-19 pandemic canceled concert dates around the world, renowned singer Giada Valenti took her talents back to the studio. With the help of an award-winning team of musicians and producers, all of them adjusting to life away from the stage, Valenti is putting the finishing touches on her most ambitious album to date: a collection of Christmas songs recorded at Capitol Studios in Los Angeles and the legendary Abbey Road Studios in London. The album is scheduled for a November 1, 2021 release in the United States and Europe.

The album is part of Valenti’s Holiday Celebration project, which will include a television special and a concert tour of the United States. It features several duets with major artists and a carefully selected mix of holiday standards and lesser-known Christmas songs.

“Much as I regret the reasons why we all had time to work together, I am thrilled at the opportunity to collaborate with such a talented group of artists,” Valenti enthuses from her Las Vegas home. “It might have been 110 degrees outside while we recorded ‘Let it Snow, Let it Snow,’ but we’ve captured something genuinely special here. Christmas is a time of hope and celebration when the days grow short, the nights grow cold, and the future grows uncertain. In that sense, I think we’re recording the perfect album for our times.”

The album’s first half was recorded in June at LA’s Capitol Studios by engineer Don Murray (Mariah Carey, Johnny Mathis). Valenti was joined by a remarkable group of musicians, including Tariqh Akoni (Josh Groban) and Anthony Wilson (Diana Krall) on guitar, and Nathan East (Fourplay) on bass. Producers Berg and Field joined the fun on piano and drums, respectively.

The remaining tracks will be recorded in July at Abbey Road, where Valenti will be accompanied by the Royal Philharmonic Orchestra under the direction of Robert Ziegler. Four-time Grammy winner Simon Rhodes (John Williams, James Horner), Abbey Road’s Senior Engineer, will man the boards.