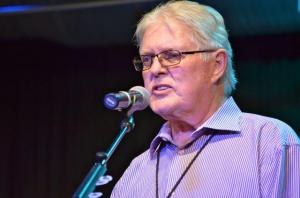 BREMEN, GA, UNITED STATES, June 14, 2021 /EINPresswire.com/ — Harold Shedd has spent most of his life making sure the spotlight shined on the artists he produced, including artists he discovered and/or produced such as the band Alabama, Toby Keith, Mel Tillis, Shania Twain, Reba McEntire, Billy Ray Cyrus and more. On Saturday, November 13th, the focus will be on Shedd, one of country music’s most beloved and successful industry executives and producers.

For Shedd’s 90th birthday there will be a celebration held at Mill Town Music Hall in his hometown of Bremen, Ga. (1031 Alabama Avenue, just off Harold Shedd Highway). There will be tribute performances by some of Harold’s favorite artists, to be announced in future months as the lineup is built.

The Shedd family requests that in lieu of gifts that you consider a donation to:

Shedd played in a local band and served as a radio disc jockey for 14 years in Bremen prior to moving to Nashville. In 1979, he was instrumental in signing Alabama for RCA and then produced 21 consecutive number one hits for the band. He also produced albums for Mel Tillis, Reba McEntire, and Glen Campbell. In 1988, Shedd joined Mercury Polygram Records Nashville, where during the next six years he oversaw the signing of Shania Twain, Billy Ray Cyrus, Toby Keith and Kathy Mattea to name a few. Shedd has been inducted into the Georgia Music Hall of Fame and is recognized within the Country Music Hall of Fame.