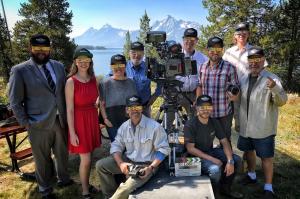 One of 26 camera teams that captured the 2017 total solar eclipse for Einstein’s Incredible Universe (pictured here in Grand Teton National Park with astronomy students from the University of Wyoming and Prof. Andrea Ghez – 3rd from the left)

We hope our film will inspire a new generation of problem solvers to ask equally big questions and exploit the limitless laboratories within their own minds.”
— Daniel Ferguson, Writer and Director, Einstein’s Incredible Universe

This news comes on the heels of the historic, once-in-a-lifetime Genius 100 event that took place on Sunday, March 14th, 2021, to celebrate Einstein’s birthday and the annual Genius 100 Visionary induction ceremony for Astronaut Dr. Soichi Noguchi (G100V 2021).

Historic? Once in a lifetime? Yes, on the afternoon of March 14th, Genius 100 Foundation was connected via live feed to the International Space Station (ISS) for a private G100 Visionary induction ceremony and conversation with Astronaut Dr. Noguchi (JAXA) as he was orbiting the earth.

In honor of Einstein’s significant impact on science and space exploration and to celebrate new G100 Visionary Noguchi, filmmakers Daniel Ferguson and Taran Davies of Cosmic Picture, debuted a first look trailer of Einstein’s Incredible Universe during the ceremony.

“It seemed kind of perfect to celebrate Einstein’s legacy and launch this film from the ISS,” stated Daniel Ferguson, Writer and Director. “So much of our current understanding of how the universe works stemmed from questions and thought experiments he explored in his imagination. We hope our film will inspire a new generation of problem solvers to ask equally big questions and exploit the limitless laboratories within their own minds. Thanks to the global collective power of the Genius 100 team, this film can finally become a reality.”

Designed and conceived for the largest screens on earth, Einstein’s Incredible Universe takes audiences on a spellbinding journey through space and time in a way few have ever experienced, revealing some of the strangest phenomena in the known universe – the collision of massive black holes, exploding supernovas and swirling neutron stars – all in stunning, immersive 3D.

The film tracks the work of two astrophysicists who are building on Einstein’s work and putting his theories to their greatest test yet. They are 2020 Nobel Prize-winner, Prof. Andrea Ghez, famously known as “the black hole hunter” and Prof. Nergis Mavalvala, part of the Nobel Prize-winning team that detected gravitational waves. As they explore Einstein’s radical ideas about gravity, Ghez and Malvalvala guide us through a series of astonishing experiments that are redefining our vision of the cosmos.

One of the highlights of the film is extraordinary footage captured during the 2017 total solar eclipse, nearly a century after a similar eclipse offered the first observational validation of Einstein’s General Theory of Relativity. For this film, 26 cameras captured the event across 7 U.S. states, including the most definitive proof of relativity ever captured by amateur astronomers.

“It’s jaw-droppingly astonishing that with little more than his imagination, Einstein was able to see, comprehend and develop his theories – and now more than 100 years later – we are still scientifically evolving based on his work,” states Hilarie Viener, CEO, Genius 100 Foundation US. “Our entire global community is honored and thrilled to work with and support the team at Cosmic Picture to bring this must-see film to audiences around the world.”

Einstein’s Incredible Universe will be released to IMAX and giant screen cinemas in early 2024, prior to the total solar eclipse that will sweep across Mexico, the U.S., and Eastern Canada.

About Genius 100 Foundation
Genius 100, referred to as G100, was born out of the centennial celebration of Einstein’s Theory of Relativity (2016). To honor this landmark occasion, 100 of the world’s greatest minds were researched, selected, and nominated to contribute their vision of the future to the publishing of the first 3D book” Genius: 100 Visions of the Future.”

Founded in Toronto in 2017, with a global footprint, Genius 100 Foundation is a Registered Charity in Canada and a 501c3 non-profit in the US, with an active and engaged community of exceptionally imaginative and impactful human beings.

The Genius 100 Visionaries (G100V) are comprised of an extraordinary group of 100 globally recognized, accomplished, compassionate minds. The Genius 100 Foundation brings together Visionaries, philanthropic impact investors and its extended global community, collectively and in collaboration, to re-imagine the future – implement creative initiatives to improve our world – raise the bar on what is achievable and make the impossible – possible.

Genius 100 Foundation Mission
We leverage the knowledge and resources of the G100 community to support impactful humanitarian and environmental initiatives through collaboration and funding structure.

Genius 100 Foundation is a registered Charity in Canada and 501c3 US.

About Cosmic Picture
Cosmic Picture was founded to make the most compelling cinematic experiences possible, to change your perception of the universe in ways you never imagined, and to distribute those experiences to theaters, museums, planetariums, zoos and aquariums to have the broadest reach possible.

Our past films include award-winning IMAX® and giant screen productions and transformative environmental documentaries with tremendous social impact. We take on impossible challenges to bring you spectacular visions and unforgettable experiences of our world. In 2018, we successfully launched our distribution division with our own films and the award-winning films from the National Geographic film library.