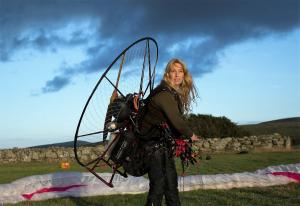 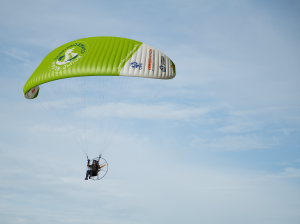 LONDON, GREATER LONDON, UNITED KINGDOM, June 7, 2021 /EINPresswire.com/ — “If Climate Change is the biggest issue facing us all, why is it so hard for teachers to find resources with UK examples and case studies?”

The Round Britain Climate Challenge is a hair raising expedition involving a circumnavigation of Britain in a specially adapted electric paramotor by Sacha Dench, Ambassador for the UN’s Convention on Migratory Species and Founder of Conservation Without Borders, also known as the Human Swan.

It’s a feat that has never been attempted before.

A new interactive education package, created by teachers for teachers, will allow students to join the expedition live from air, land and underwater and be part of breaking two new Guinness World Records.

This 3000-plus mile expedition will launch on 18th June at the Glasgow Science Centre and travel anti-clockwise around Britain ending back in Glasgow around 6 weeks later. The journey is designed to inspire and excite the nation to get involved in tackling the climate crisis in the run-up to COP26. The question the team want to get the whole country asking is ‘If Britain drove the Industrial Revolution, can we drive the Green Revolution too?’

On completion, Sacha will set a new Guinness World Record for the fastest (and first) paramotor flight around Britain. It will also be a first long-distance test of an electric paramotor ever attempted anywhere in the world.

Sacha will be landing frequently, talking with, filming, and gathering information from, industry, innovators and entrepreneurs, local heroes, communities, schools, farmers and individuals – anybody involved in addressing the effects of climate change in their areas. Supported by a ground crew with film specialists in four electric vehicles the team will be filming from the air, ground and underwater.
Sacha has partnered with Kate Stockings, blogger, campaigner and Head of Geography at a London school to bring to schools, teachers and educational organisations an exciting programme for teaching climate change.

Climate education is invariably taught from a global perspective – crucial – but often difficult for students to relate to and apply to their own existence and environment.

Kate Stockings says:
“I often struggle to find resources and case studies which sit closer to home, and I jumped at the chance to collaborate with this fantastic expedition. It’s totally unique and has so much potential as a tool with which to teach climate change. As the team travels around the UK, this journey provides an opportunity for teachers to get up-to-date, in-depth information about what the UK is doing to tackle climate change. For me, this is what makes it so exciting!”

A second world record attempt is a mass public call to get at least 140,000 people to sign up to Count Us In, a global carbon initiative, in a one month period starting from 18th June. On achieving this every participant will be able to download their own Guinness World Record certificate saying they were part of this world record. www.conservation-without-borders.org/education-platform
Aimed at 7-14 year olds, the free resources will be inclusive and accessible, offering relevant localised case studies to engage students with local climate-related issues.

Included in the education programme will be:

• Twice weekly video calls between Sacha and Kate will reveal details of the projects visited – pupils can ask Sacha a question via their
teacher – and videos will be easy to use in classes or assembly environments
• Schools can visit the expedition team at campsites and follow on social media.
• There will be a live expedition map hosted on the education platform to track Sacha’s progress and get information about projects
• A competition with winning entries taken to the UN COP 26 will ask the question “Britain drove the Industrial Revolution, how could the UK also lead the Green Revolution?” Entries can be anything from prose to paintings or sculptures. The more imaginative the better!
• Everybody gets a chance to be part of breaking a Guinness World Record through the Count Us In initiative – and every participant will receive a badge recognising their contribution to the world record attempt

At the end of this spectacular journey the professional footage, incredible stories, and lessons learnt will be combined into a free set of resources to aid the teaching of climate change with homegrown project examples, unsung heroes, and inspiring ideas on how to help battle climate change.

“Young people in general have a good awareness of the issue of climate change but not necessarily what they can do as individuals to help. With this programme we want to show them the kinds of actions they can take, what career opportunities could exist in a greener economy – and present the challenge in a really exciting and visual way that makes them really want to get involved”

• June 18th at the Glasgow Science Centre Sacha, paramotor, all the ground crew, vehicles, equipment and support teams will be present
• The whole team – 4 electric vehicles, paramotors and camping gear will be based at Loch Lomond and available for photo opportunities/interviews on the 17th and 19th June
• Prior to arriving in Scotland the team and Sacha will be undertaking training in Cornwall and Dartmoor between 7th- 15th June. There may also be photo / interview opportunities here

Notes
• The expedition and Sacha’s progress will be tracked online here once the expedition starts: www.climatechallenge.live
• Photo and video content, live broadcasts, can be facilitated during the expedition care of the professional media team in the ground crew
• There will be opportunities for interviews at campsites most evenings
• Email us to be notified of the launch event details in Glasgow
• There will be celebrities joining Sacha en-route, names to be announced.