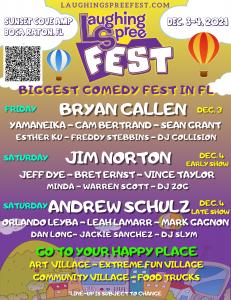 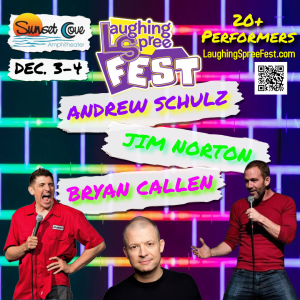 “It’s going to be a phenomenal event because you never see this many giant comedic names on the same line-up, it just doesn’t exist any where in Florida,” said Co-Producer Warren Kirschbaum.”
— Warren Kirschbaum

BOCA RATON, FL, USA, October 14, 2021 /EINPresswire.com/ — Boca Raton, Fl – October 14, 2021 – Laughing Spree Fest, a multi-media, immersive comedy, music and art festival supporting national charities and community groups is at Sunset Cove Amphitheater with some of the biggest names in stand-up comedy and South Florida music on the line-up. It is the biggest comedy festival in Florida, and the first multi-day comedy festival since the South Beach Comedy Fest ended in 2016.

Keynote performers on the two-day festival include Andrew Schulz, Jim Norton, Bryan Callen, Yamaneika Saunders, Jeff Dye, Esther Ku, Bret Ernst and Leah Lamarr. In addition, there are many other national-touring comedians and Florida’s top DJs, such as DJ Zog from Power 96, performing at the event. Also hitting the stage over the two-day event is an array of homegrown stand-up comedy talent that began their careers in Florida and have gone on to achieve success, such as Orlando Leyba (NBC), Sean Grant (TBS), Cam Bertrand (AGT), and Vince Taylor (MTV).

“We are incredibly excited to bring this much talent to one stage”, said LS Fest Co-Producer Warren Kirschbaum. “It’s going to be a phenomenal event because you never see this many giant comedic names on the same line-up, it just doesn’t exist any where in the state of Florida. I am so happy to be able to be part of it,” said Kirschbaum.

In addition to live comedy and music performances, the event experience includes multiple “Villages” dedicated to different themes for ticketholders to enjoy over the two-day festival. The “Community Village” is dedicated to non-profit & community organizations gaining visibility and fundraising with causes such as Best Buddies, Parkland Cares, Dream Defenders, Fxck Cancer, and others. Also, an “Art Village” with local artists showing off their pieces, and “Extreme Fun Village” with specialty bar, alternative performers, games and attractions will complete the attendee experience.
Laughing Spree Fest plans to operate at 50% reduced venue capacity, with COVID precautions in place to keep festival attendees safe, while providing a unique, outdoor event experience. Laughing Spree Fest is created and produced by Big Idea Charities (501c3), Comedy Now Productions and Comedy Basement Events, producing comedy and fundraising events since 2014. For more information or to purchase tickets go to www.laughingspreefest.com.

About Big Idea Charities: Laughing Spree Fest is produced by Big Idea Charities (501c3), whose mission is to give visibility, awareness and fundraising opportunities to national charity and local community organizations to uplift, support and inspire the collective good.
About Comedy Now Productions, LLC: Based in West Palm Beach, Comedy Now Productions brings over the top comedy events to venues big and small.