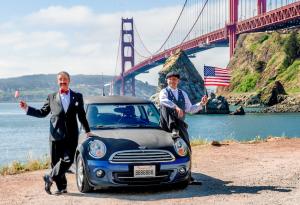 Magicians Ash K. & Kevin the Cap, Prior to Figuring Out the Car is Too Small for the 48 State Trip

Two of the Bay Area’s favorite magicians kick off their unprecedented Magic Show Drive Across America with one last local performance. A must-see show!

May I please leave now and go practice? Also, you need to go pick up the repaired table.”
— Ash K.

Two of the Bay Area’s favorite magicians kick off their unprecedented Magic Show Drive Across America with one last local performance on Wednesday, June 23, from 8:00 to 10:00, at the Great Star Theater in San Francisco.

Ash K., aka Northern California’s funniest magician, was named the BayList Winner in the arts & entertainment category by readers of The San Francisco Chronicle and SFGate.com. Hailing from the tiny Eastern European country of Balka (he helpfully explains, “Go to Poland, and make a right – can’t miss it.”). Ash K. is often described with quirky and vaudeville come to life.

Kevin the Cap practices what he calls Smart Magic for Smart People. Like Ash K., he is a Magician Member in good standing of the internationally recognized Academy of Magical Arts, known for its clubhouse, Hollywood’s Magic Castle.

For this special Bay Area send-off show, Ash and Kevin will be joined by guest magician Tom Collett, a California Teacher of the Year, who mixes his knowledge of science and his love of magic for an evening of sci-fi wonderment.

The Great Star Theater is located in San Francisco’s Chinatown at 636 Jackson between Kearny and Grant.
For tickets, visit http://tiny.cc/MagicShowJune23

Learn more about Kevin the Cap at KevinTheCap.com.

About the Shows:
“Our shows are quite different,” explained Ash K., or as his friends call him, Ash. “Kevin is the gentleman conman – utterly charming, and his magic is stellar.” Kevin then offered his description of Ash K.: “Ash K. is something from a century ago: a vaudeville act, complete with his inimitable accent. Quirky, and big fun. We think it’s nice to give bookers and audiences a choice.” Their route will take them from sea to shining sea, you’ll be able to chart their journey on their website, MagicShowDriveAcrossAmerica.com.

From major cities to farming towns, they intend to perform for people in all manner of places: libraries, retirement communities, regional theaters, summer camps – even private parties along the route. “And magic classes!” chimed in Ash K. “Be sure to mention the magic classes Kevin teaches to adults, kids, or both!”

“The object is that three letter word: fun,” said Kevin. “It’s been a tough year-plus for humanity, and Ash K. and I decided that driving our two shows across the country, bringing them to audiences of all kinds, would be a great chance for people to see our shows who otherwise couldn’t. We are coming to YOU.”

About the Tour:
Kevin further explained the historic origin of the tour: “Several historians of magic told us that we are the first to drive through all 48 states in a season. From ancient times until the 1940s, entertainers rode on horses, then in wagons, and then cars from town to town, bringing their comedy acts, ventriloquism, gymnastics, dramatic readings, and magic acts to crowds eager for diversion and something different. With the rise of movies nearly a century ago, then aviation, that migratory version of our profession disappeared, and entertainers simply take a plane to their next engagement. We’re a bit of a throwback, and audiences love it.”

* * Now that more Americans are vaccinated (as are the two magicians), and the Center for Disease Control has determined that surfaces are not how the infamous virus is transmitted, a July 1st start date seems reasonable, and while traveling, Ash K. & Kevin the Cap will continue to adhere to public health protocols as determined by the CDC and individual communities.