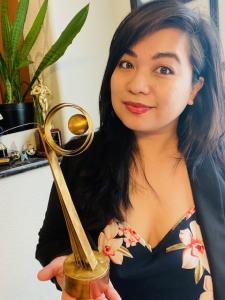 Giovannie Espiritu with award for her film, Ally 3000 (over 12+ awards on the film festival circuit)

The theme of the 2021 FWN Summit “Be Influential. The Power is Us.” is directly in line with the way I believe how powerful storytelling and the film industry can be in shaping society.”
— Giovannie Espiritu

The Foundation for Filipina Women’s Network recognizes women of Philippine ancestry who are changing the face of leadership in the global workplace, having reached status for outstanding work in their respective fields and are acknowledged for their contributions to society, femtorship and legacy. Espiritu was selected from an outstanding field of nominees from around the world.

The Innovator and Thought Leader award recognizes women who have broken new ground in the marketplace, have delivered new and unique applications of emerging technology transforming the way people think, in the fields of business, sports, literature, the arts and pop culture, or have improved the lives of others by helping develop a product or service in the fields of finance, science, technology, engineering, fashion, cuisine, architecture, arts, film and entertainment. This award category is also for someone who has launched a new enterprise, a learning function or completely overhauled an existing way of doing things, resulting in new development or community initiative.

“The Global FWN100™ awardees are innovators and thought leaders, dynamic entrepreneurs, rising stars under age 35, practitioners, and public service advocates, who have moved through the ranks in the public and private sectors. They are magnificent women doing extraordinary work trailblazing for the next generation leaders,” said Marily Mondejar, Founder and CEO of the Foundation for Filipina Women’s Network.

“Giovannie Espiritu is now a valued partner in helping FWN develop the Filipina community’s pipeline of qualified leaders to increase the odds that some will rise to the “president” position in all sectors of the global economy,” added Georgitta Puyat, FWN president and Board Chair of the Philippine Orchard Corporation.

“I love that Filipinos are gaining more recognition in different industries. The theme of the 2021 FWN Summit “Be Influential. The Power is Us” is directly in line with the way I believe how powerful storytelling and the film industry can be in shaping society. We influence the collective consciousness. I’m excited to meet my fellow awardees from other countries, learning more about their lives, the partnerships and collaborations we can create. I’m thankful to FWN for bringing the Filipina women of the world together to plan the future for our community and next generation leaders,” says Espiritu.

###
About Giovannie Espiritu
Actress and filmmaker Giovannie Espiritu was nominated alongside Academy Award Nominees Alfre Woodard and Amy Irving for Best Supporting Actress at MethodFest for the Mynah Films feature film Fiona’s Script. Primetime credits include a recurring role on ER, Bones, Gilmore Girls, Trauma, and can currently be seen as the lead in the Amazon series, “Dyke Central,” a top LGBTQ series to watch. Her short film, “Ultra-Feminist,” was awarded Honorable Mention at Outfest. Her second short film, “Ally 3000,” won Best Screenplay at the Culture and Diversity Film Festival (Los Angeles) and the Cyrus International Film Festival (Toronto), as well as several awards in the categories of Social Justice, Scriptwriting, and Woman Filmmakers. She coaches kids/teens online nationwide through HollywoodActorsWorkshop.com and was just named as one of the top 40 Audition Coaches in Los Angeles. She has served on the Board of Directors for C.O.R.A. (a Bay Area domestic violence hotline and agency) and been awarded a Certificate of Recognition from the Senate for her community service. More at: http://www.GiovannieEspiritu.com

About Filipina Women’s Network (FWN)
The Filipina Women’s Network is the organization for career women of Philippine ancestry. Our passion is to help Filipina women achieve previously unimaginable levels of performance in the public and private sectors. We accomplish this through FWN’s strategic directions and nurturing the growth and influence of our members’ businesses and careers, breaking barriers that make it difficult or impossible to succeed. With members in 31 countries, FWN provides: INFLUENCE. KNOWLEDGE. ACCESS. More at: http://FilipinaWomensNetwork.org.