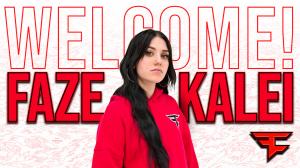 MEET THE NEWEST MEMBER OF THE WORLD-RENOWNED GAMING ORGANIZATION, STREAMING NOW ON HER TWITCH CHANNEL (TWITCH.TV/KALEI)

ONE OF THE BEST FEMALE CALL OF DUTY PLAYERS IN THE SCENE, FAZE KALEI WILL PLAY WARZONE TODAY WITH FAZE RAIN, FAZE TEMPERRR & FAZE ADAPT

FaZe Clan, the world’s most prominent gaming organization, is thrilled to welcome Kalei Renay aka “FaZe Kalei” as its newest official member, propelling her unique, highly-entertaining and provocative personality into the spotlight. FaZe Kalei (who is currently streaming at twitch.tv/kalei) caught the attention of FaZe by showcasing high-level sniper skills in Call of Duty and being unapologetically herself, not conforming to the stereotype of a typical female streamer in a male-dominated industry. Kalei has been conquering the gaming scene over the past five years with her insanely competitive energy and a next-level work ethic, which sees her streaming between 10-12 hours every single day.

In typical FaZe fashion, Kalei was welcomed to the team with a high-energy announcement video in the form of a hardcore, fast-paced Call of Duty montage, paying homage to FaZe Clan’s roots and early days (watch HERE). The montage is cut to the song “My Demons” by Starset, which was selected personally by Kalei who is a massive fan of metal and rock music. Kalei also plays electric guitar and piano when she’s not streaming to her 640K followers combined across platforms.

FaZe Kalei is also incredibly passionate and vocal about mental health. After losing her uncle to suicide, Kalei has become a huge advocate for mental health and uses her platform to openly discuss sensitive topics with her community and act as an ally to her followers.

“It’s really a dream come true to join FaZe,” says FaZe Kalei. “For me, this is a moment to say ‘F*ck You’ to all the people who didn’t believe in me or thought my personality was an obstacle. FaZe encourages me to be myself and believes I can achieve success without watering down my weirdness. That means the world to me.”

“Kalei’s stream has been on in our living room for months now,” says FaZe Clan founding member FaZe Temperrr. “She is hilarious, entertaining and absolutely INSANE at Call of Duty. We’re so excited to have such a total badass join the FaZe family. Let’s go FaZe Kalei!!!!”

“We are thrilled to have Kalei join the FaZe family,” says FaZe Clan CEO Lee Trink. “Kalei has true FaZe style star power and we support her resolve to remain true to her authentic self without conforming to a particular idea of what a female gamer should look or act like. Welcome to FaZe, Kalei!”

FaZe has been working with Kalei for months in the FaZe Academy, which is an in-depth training program created to develop new members and help them realize their destiny as elite players and content creators. FaZe Academy covers important topics such as FaZe Clan History 101, Cultural and Sensitivity Training, Code of Conduct Review, Media Training, Mental Health Awareness, Content Strategy and Creation, and Audience Development.

About FaZe Clan:
Since its inception in 2010, FaZe Clan has established itself as the world’s most prominent and influential gaming organization known for its disruptive original content and hyper-engaged global fanbase of over 350 million combined across all social platforms. FaZe Clan holds an unrivaled position at the epicenter of gaming, sports, culture and entertainment, driving how the next generation consumes content, plays and shops. Their roster of 85 influential personalities consists of world-class gamers, engaging content creators and a mix of talent beyond the world of gaming, including NBA star Ben Simmons, Lebron “Bronny” James Jr and Lil Yachty. The organization’s unmatched esports division includes ten competitive teams in Fortnite, FIFA, FIFA Mobile, PUBG, PUBG Mobile, Rainbow Six, Call of Duty League (Atlanta FaZe), VALORANT, Rocket League and CS:GO with dozens of world championship trophies among them. In addition, FaZe Clan has become a sought-after fashion and lifestyle brand through an inspired apparel line and limited-edition collaborations with partners including Champion, NFL, Manchester City FC, Lyrical Lemonade, Kappa, CLOT, LA Kings, and more. Follow us @FaZeClan, @FaZeApparel and @FaZeUpdate.