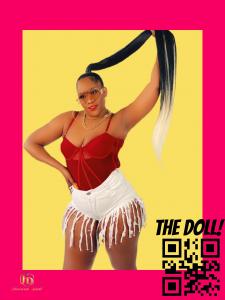 HOUSTON, TEXAS, UNITED STATES, June 11, 2021 /EINPresswire.com/ — With an electric new single, Haitian Doll is curating her own musical journey, while enthralling listeners with blends of Hip Hop, Latin and Pop musical compositions. Characterized by a new and ambiguous musical vibe, Haitian Doll’s music is both bold and memorable. A strong believer in achieving freedom and liberty through the power of music, her stirring compositions exude a uniquely upbeat musical style.

The growing singer turns to music to find clarity in a trouble-struck world, empowered by the battery that it offers her. Surging forward with resonant and relatable musical compositions, Haitian Doll’s music is a perfect mix of rich and sensory feelings, which are delivered through powerful vocals and catchy hooks. Her hip singles, such as “Teenie Weenie” and “Hustler Bitch Anthem” reflect a riveting mix, which is marked by the crucial issues of society, pushing forward Haitian Doll’s aim to create music for the mind, soul, and heart.

Influenced by the work of artists such as Celia Cruz, Missy Elliot, Lisa Left Eye, Daddy Yankee, Mark Anthony, and Shakira, among others, the growing artist is motivated to touch people’s lives with her captivating song writing and soundtracks. Through her powerful mixes, Haitian Doll aims to grow and use music to connect with the people who are told that they cannot achieve anything in this world, while breaking down cultural barriers through each single.

“My music is different because it is diverse and influenced by different genres, from ballads to Hip-Hop, Latin music, Haitian Compa, and last but not least the Haitian root music,” says the rising artist regarding her new release.

Check out her new music learn more about Haitian Doll on the links below and/or reach out via the contact information for interviews, collaborations, and promotional access.

Haitian Doll is an up-and-coming Hip-Hop artist based in Houston, Texas. The eclectic artist has faced multifaceted troubles in her life, having little to nothing yet always persevering with a determined spirit. A motivated force, Haitian Doll’s life journey saw her struggling, and then landing coveted college scholarships, joining the military to create her own future, and then finally pursuing her musical talents and genius.

Driven by the motto that “why stop at the sky when there is a whole universe to explore?”, Haitian Doll continues to amaze listeners with her enigmatic mixes, fixed within her Haitian Roots. Her vision is that music becomes incorporated in everyday activities everywhere because when things get tough for her, music is her ultimate fix. On the road to unlock every one’s inner “Haitian Doll”, she is inspiring audiences with her Rap, Pop, R&B, Reggaeton, and Afro blends.