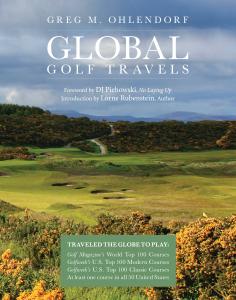 Enjoy the globe-trotting journey of the author as he chases his dream of playing the world’s most outstanding golf courses.

I’ve known Greg for almost 20 years. Since I’ve known him, he’s been working hard to accomplish a feat most people only dream about. His love of golf has led him to play the best courses in the world.”
— Armand Cimaroli, Senior Director – Golfweek Events and Rater Program

“Ohlendorf’s open-mindedness to, and immersion in, the landscapes of golf and their cultural associations are refracted throughout his chronicles. His deep feelings for the game in all its variety and elements come through on every page. Now, I have played many courses around the world, although not nearly as many as your gifted storyteller in these pages. As I finished every chapter, I thought of the courses that through Ohlendorf’s stories I had at least visited vicariously. I’m at an age now where I don’t travel for golf nearly as much as I used to. But Ohlendorf has reawakened my thirst for global golf travel. The thirst is there again—thank you, sir—although I know I won’t likely slake it,” – Lorne Rubenstein, author of A Summer in Dornoch.

Many golfers have dreamed about playing on PGA Tour courses, Open Championship rota courses, or behind the gates of the world’s most celebrated and private courses. Golf is one of the few games where ordinary people can walk in the footsteps of the game’s greats and play on the same fairways and greens. Some golfers make significant strides in accomplishing their dreams and goals. Ohlendorf is one of the few who made it to the finish line. His new book, Global Golf Travels, tells the tale.

But his story is far more than just a recitation of the lists he’s finished. Ohlendorf recounts the people he met and played with, the places he visited, the crazy things that happened along his many miles of travel, the planning and organization it took to pull it off, and the reasons golf is one of the greatest games on the planet. He also shares some of the tricks and tips on how to follow in his footsteps.

More importantly, Ohlendorf’s adventure is a story of family. His wife, Melissa, who he calls “the greatest golf wife in the world,” his son, Cameron, and his nephew, Clint, were along on much of the journey. Ran Morrissett, a co-founder of the golf website Golf Club Atlas, said, “Thousands of people have traveled the world playing golf. What Greg has done though, is include his family with that passion. By combining his two great loves, he’s created lasting memories void of regrets. Finding a healthy balance between husband/father and that of your own hobbies is no small feat. Greg shows how he pulled it off with a series of memorable adventures contained herein.”

ABOUT THE AUTHOR – Greg M. Ohlendorf is President and CEO of First Community Bank and Trust in Beecher, Illinois. When he isn’t leading the 105-year-old community bank, Ohlendorf is likely in a car or plane heading to some far-flung golf destination, searching for all that is great in the game. Ohlendorf has played the 2005-2013 Golf Magazine World Top 100 courses, the 2010 Golfweek Magazine Top 100 Modern and Top 100 Classic courses, at least one course in all 50 states, and over 1,000 courses in total. It’s believed he is only the second person ever to complete those combined feats. Ohlendorf has been published in Golfweek Magazine and The Golfer’s Journal.

Coping with Crises Through Mindfulness