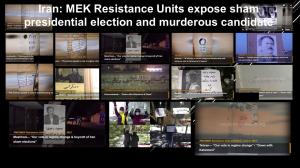 The campaign was first launched by the MEK Resistance Units in April with the slogan “Our vote is regime change” and expanded in May.

Several cities across Iran see slogans written on the walls that read, ‘My vote is regime change, yes to a democratic Iran,’ ‘Down with Khamenei, down with Raisi,’ ‘no to the religious dictatorship.’”
— NCRI

PARIS, FRANCE, June 11, 2021 /EINPresswire.com/ — The nationwide campaign to boycott the Iranian regime’s sham elections continues across Iran. Various segments of Iran’s society, especially families of the victims of the November 2019 nationwide protests, are stressing that they will not vote in the election in honor of the blood of their loved ones, and their calling on their compatriots to do the same in defiance of the Iranian regime’s tyranny.

At the same time, several cities across the country see slogans written on the walls that read, “My vote is regime change, yes to a democratic Iran,” “Down with Khamenei, down with Raisi,” and “A strong no to the religious dictatorship.”

These vast activities have been organized by the network of the People’s Mojahedin Organization of Iran (PMOI/MEK) inside Iran, known as the Resistance Units. The campaign was first launched by the MEK in April with the slogan “Our vote is regime change” and expanded in May. The slogans won popularity on the daily basis and echo the current circumstances of the Iranian society that rejects the mullahs’ regime in its entirety.

All around the country, the MEK Resistance Units installed posters, images, and banners to support regime change. In their activities, they call the main candidate of mullahs’ sham elections, Ebrahim Raisi, a murderer who was a key member of the death commission who sent thousands of political prisoners to the gallows in a matter of months in 1988.

Slogans such as “Iranian people’s vote is regime change, yes to a democratic Iran,” “No to the sham elections, no to the mullahs’ rule, yes to freedom,” “Khamenei’s rule is illegitimate,” and “Boycott of Iran sham elections is a national duty” were spread in these cities.

In major cities such as Tehran, Isfahan, Shiraz, and Mashhad, the MEK Resistance Units installed, posters of the Iranian Resistance leader Massoud Rajavi and the President-elect of the National Council of Resistance of Iran (NCRI) Maryam Rajavi with the slogans “Democracy and freedom with Maryam Rajavi,” “Down with Khamenei, down with Raisi, hail to Rajavi,” and “Our vote is regime change and a democratic change and people’s sovereignty.”

In the days before the elections, the calls for the boycott of mullahs’ ballot boxes have increased. Every day, families and relatives of martyrs of the Iran uprising in November 2019 send video messages calling for the boycott of the sham elections and say, “My vote is regime change.”

Also in various cities, the defiant youth torched and demolished Raisi’s images. These acts have become so popular that Ebrahim Raisi told in a speech on June 9, “I have ordered not to print more posters and instead spend the money on the poor.”

the overthrow of the regime, the regime’s supreme leader Ali Khamenei needs a so-called election to legitimize his rule. And the social outrage toward the regime has raised many concerns among clerical rulers in Iran.

The state-run daily Setareh Sobh wrote on June 8, “Based on the latest poll, after the first presidential candidates’ debate the participation of citizens in the elections is estimated 38 percent.”

Also, the daily Aftabe Yazd wrote on June 8, “The first debate only had 30 percent viewership and the voter turnout will definitely be below 40 percent.”

On June 9, Yadollah Movahed, head of Judiciary in Kerman province told the state-run IRNA news agency, “The amount of propaganda to boycott the elections is unprecedented.”

He threatened any activists and persons calling for the elections boycott, “We will deal very hard with any person or media that accompanies the enemies.”

Khamenei fears a low election turnout. At the same time, he desperately needs Raisi to become his next president. He tries to consolidate his regime to confront an outrageous society. Therefore, he needs someone like Raisi who is known for his merciless and ruthless acts in 1988 by slaughtering 30,000 political prisoners.