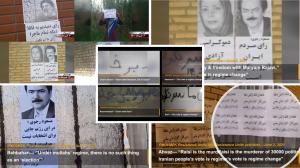 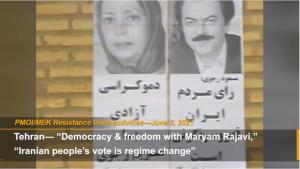 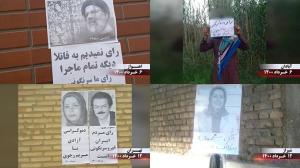 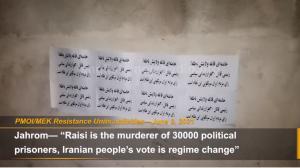 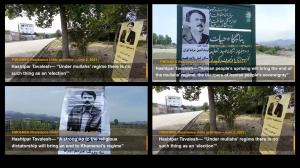 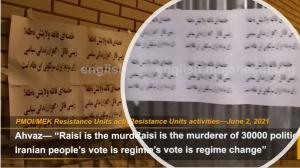 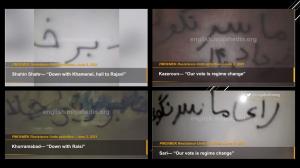 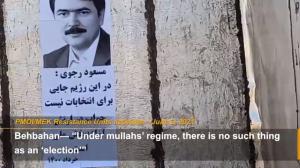 In nationwide protests in recent years, people chanted “Reformists, hardliners, the game is now over,” expressing that both regime factions are no different.

During the whole month of April, these activities were carried out in over 250 areas in 27 provinces. In May this exceeded in over 310 places in all Iran provinces.”
— NCRI

PARIS, FRANCE, June 5, 2021 /EINPresswire.com/ — The network of the People’s Mojahedin Organization of Iran (PMOI/MEK) continues to carry out its activities across Iran calling for the boycott of the Iranian regime’s sham elections.

Every day, MEK’s network, known as the Resistance Units, organizes anti-regime activities all around the country, installing posters, images, and banners to support regime change. They call the main candidate of mullahs’ sham elections, Ebrahim Raisi, a murderer who was a key member of the death commission who sent thousands of political prisoners to the gallows in a matter of months in 1988.

In walls of various cities were written, “We will not vote for murderers,” “Boycott mullahs’ sham elections,” and our vote is regime change. The campaign was launched in April by the MEK and is expanding every day. During the whole month of April, these activities were carried out in over 250 areas in 27 provinces. In May this exceeded in over 310 places in all Iran provinces.

In major cities such as Tehran, Isfahan, and Mashhad, the Resistance Units installed, posters of the Iranian Resistance leader Massoud Rajavi and the President-elect of the National Council of Resistance of Iran (NCRI) Maryam Rajavi with the slogans “A strong no to the religious dictatorship, yes to a democratic republic,” “Down with Khamenei, hail to Rajavi” and “The Iranian people’s vote is regime change.”

These activities are largely welcomed by the public and have become a national movement to boycott the elections. Many believe that “The election boycott is a response to the killing of 1500 protesters in November 2019.”

In social media many mothers of the martyrs of November 2019 protests bravely published videos calling for the boycott of mullahs’ farce elections and loudly say, “My vote is regime change.”

These activities are taking place while these activists take many risks. In an interview with Times Radio, one of these activists bravely said, “None of my friends or family will vote, the mullahs’ elections is a joke.”

Also on Sunday May 30, Iranians around the world launched a worldwide campaign in the social media, supporting election boycott and regime change in Iran. The main hashtag of the campaign, #BoycottIranShamElections and #MyVoteRegimeChange was used over 120,000 times in the few first hours.

The regime state-run media acknowledged on Thursday, June 3, to the public disdain toward the so-called elections. “As the June 28 election approaches, the psychological warfare of the enemies against our establishment and to boycott the elections has intensified through diplomatic means, news and satellite networks, and cyberspace,” wrote the state-run daily Javan affiliated to the Revolutionary Guard (IRGC).

The campaign of the boycott of regime sham elections also clarifies real opposition movement from those claiming to oppose the regime.

On Thursday, June 3, Mehdi Karoubi, a so-called reformist and one of the leaders of “the green movement” emphasized “maximum participation in elections,” and condemned “illegal interference” in upcoming elections. This is while in the current circumstances, the overwhelming majority of the Iranian society will boycott the sham elections and see this movement as the flip side of their popular uprisings.

It is also worth reminding that during nationwide protests in recent years people chanted “Reformists, hardliners, the game is over,” expressing that both regime currents have no differences.