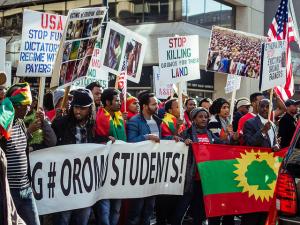 OLLAA records more cases of extrajudicial killings and human rights abuses in Ethiopia and plans to hold a rally on inauguration day to raise awareness.

Congress has done so much to push for an end to the human rights abuses against the Oromo people, but what is needed are tough sanctions against the people behind the killings.”
— Seenaa Jimjimo

WASHINGTON, DC, UNITED STATES, December 18, 2020 /EINPresswire.com/ — Despite Amnesty International’s May 29, 2020 report outlining the extrajudicial killings and other serious human rights violations committed against Ethiopian-Oromos civilians by Ethiopian security forces, reports of ongoing extrajudicial killings and human rights violations continue to be reported from Ethiopia. The Oromo Legacy Leadership and Advocacy Association (OLLAA) supports all the congressional actions taken to stop the reported crimes being committed by Ethiopian security forces but fears that the congressional hearings and resolutions have not had the intended effects of deterring Ethiopian security forces and militia from committing these heinous crimes. From November 16, 2020, to November 23, 2020, OLLAA’s grassroots efforts in Ethiopia recorded the illegal killing of 74 Oromos. On December 9, 2020, the Senate Introduced Senate Resolution (S.Res.) 798, which calls for the protection of all Ethiopian lives. While encouraged by this new resolution, OLLAA members fear that this resolution will have little or no effect in stopping the violence.

For all inquiries relating to this press release, please contact: