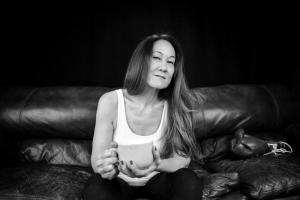 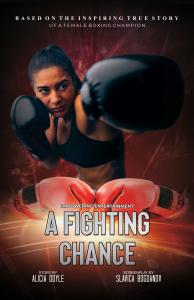 The mission of Empowering Entertainment is “to create powerful stories to empower and inspire you to greater highs.” Five percent of the profits of the feature film (or television series) will benefit a charitable organization that serves battered women and/or children.

Bogdanov chose Doyle’s story because “I loved the courage and tenacity, and I was touched by the heart of a fighter who fights for her right to stand up for herself and win at the game of life.”

Since Fighting Chance was published in February of 2020 – just one month before the global pandemic hit – it has won three literary awards: First Place in Creative Nonfiction and Memoir in the 2020 North Street Book Prize Winning Writers Competition; 2020 WBAN “Cool Story of the Year”; and 2021 Best Autobiographical Book.

“With Covid, the movie industry came to a halt, and the financiers I was speaking with stopped any film investment,” said Bogdanov, adding that so far, none of her financiers are interested in getting back into funding films. Nevertheless, she remains hopeful. “I am waiting until more movies reopen and investors warm back up to hopefully get the film finally funded.”

Doyle, a journalist for more than three decades, discovered boxing at age 28 in the late 1990s when she went on assignment at a boxing gym for at-risk youth. For two years, Doyle simultaneously worked as a newspaper reporter while training and competing as a boxer, making her one of only a few hundred women in America who infiltrated this male-dominated sport. During her boxing career, she won two Golden Gloves championship titles and earned three wins by knockout – and her pro debut at age 30 in the year 2000 was named The California Female Fight of the Year.

“Empowering, female-driven stories are more and more in demand as women and men seek more movies with women in starring roles,” Bogdanov noted. “Not many films have been made about female boxers and that gives us an originality often sought by spectators.”

Bogdanov believes this film will be successful “because of the poignant story, the transformational arc as well as the motivation it provides for us to live a better life,” she added. “Women and men will love to see Alicia’s character win her inner battles in order to win her fight in the ring.”