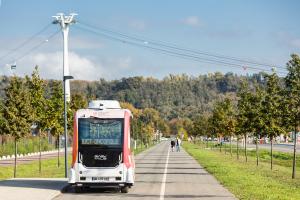 In a new milestone for autonomous driving, EasyMile has become the first driverless solutions provider in Europe authorized to operate at Level 4.

TOULOUSE, FRANCE, November 22, 2021 /EINPresswire.com/ — Toulouse, France – 22 November 2021 – In a new milestone for autonomous driving, technology company EasyMile has become the first driverless solutions provider in Europe authorized to operate at Level 4 (without any human attendant onboard) in mixed traffic, on a public road.

The authorization was handed down from France’s Ministry of Transport and Ministry of Ecological Transition, on advice of the Minister of the Interior and local authorities, for its experimentation in Toulouse, a public service at the Oncopole medical campus in the southern city, in partnership with Alstom.

Showing the level of maturity of EasyMile and its technology, it came in a decree on 29 June 2021, ahead of the implementation of the final regulatory framework allowing the circulation of autonomous vehicles on public roads in France, starting in September 2022. EasyMile passed rigorous tests and dry-runs, demonstrating the safety and reliability of the technology.

The company hosted Jean-Baptiste Djebbari, France’s Minister for Transport at its test site in Toulouse today and took the opportunity to thank him.

It is a major advance for EasyMile, as well as the wider industry, validating the scalability of its technology and positioning the provider as a forerunner.

“This is an important step towards real commercialization of autonomous driving, both on large private sites, as well as on public roads. The applications for our technology to move people and goods continue to grow, especially in locations like campuses, business parks, industrial sites, and master planned communities.

“I’m excited about the future as more and more adopt intelligent, shared transport,” said EasyMile’s General Manager Benoit Perrin.
Growing commercialization of Level 4 services
EasyMile’s fully driverless offering has seen rapid growth in the past 18 months. It was the first autonomous vehicle shuttle provider to deploy fully driverless operations in France on a private site, followed by several other Level 4 services around the world.

These include a food bank delivery in North America, deployments in the Nordics, the award-winning BusBot fully driverless shuttle in the Coffs Harbour Botanic Garden in Australia, and now the Oncopole service in France.

The company is the most experienced autonomous shuttle provider of Level 4 deployments with 7 to date, the highest number on the market today.
Pragmatic and real application for both public and closed sites
EasyMile’s shared passenger vehicles are equipped with appropriate levels of safety and system redundancies to operate safely and efficiently in a wide range of environments. With the level of integrity of this technology now high enough to withdraw on board supervisors and introduce remote supervision in a growing number of these, it unlocks commercial and operational benefits such as:

Flexibility
The service becomes fully flexible as vehicles can be deployed immediately as demand arises, without having to wait for additional operators to be available. This driving performance, with shuttles that can operate safely and efficiently in complex environments, delivers a service that is meaningful for users.

Oncopole, an important part of the SAM consortium
The service at Oncopole has been running between the main entrance and the remote parking lot, on a 600m mixed-traffic route, shared with bicycles, pedestrians as well as cars and buses since March. It will transition to fully driverless in the coming months.

It is part of the SAM* project (Safety and Acceptability of Autonomous Driving and Mobility), in partnership with Alstom, with the latest V2X technology helping the shuttle communicate with infrastructure like traffic lights. Toulouse Métropole and the IUCT-Oncopole are also important supporters of the project.

The operation is at the heart of France’s national strategy for autonomous vehicles, enabling the co-construction of a legislative framework for deployment on open roads. It is being carried out with the support of the French government’s “Investissements d’avenir” program, led by ADEME, as part of the EVRA (Experimentation of Autonomous Road Vehicles) call for projects.

*SAM is a French national-scale project of driving and autonomous mobility experiments bringing together industrial players, research and territorial partners. The challenge is twofold: to develop the uses and knowledge of these systems by citizens and local stakeholders and to build the future regulatory framework, particularly in terms of safety validation.