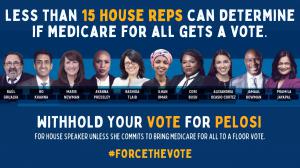 Cornel West, Jimmy Dore, and MPP are Forcing the Vote on Medicare for all

Cornel West, Jimmy Dore, and MPP force the vote on Medicare for all

Public intellectual and Harvard professor Dr. Cornel West and political comedian Jimmy Dore have joined the People’s Party Advisory Council. Together with the Movement for a People’s Party, they are launching the Force The Vote petition and organizing campaign. The campaign aims to pressure The Squad and House progressives to refuse to vote for Rep. Nancy Pelosi as Speaker until she publicly pledges to bring Medicare for all to the floor of the House for a vote. Nearly 10,000 people signed the petition overnight.

Dore hosted Dr. West on The Jimmy Dore Show Friday evening where they broke the news. “We’re joining forces with the Movement for a People’s Party. We are ForceTheVote.org,” said Dore. “There’s never a wrong time to do the right thing. And now is the time, in the middle of a deadly pandemic. There’s never been a better time to have a Medicare for all vote.”

“Here we have to bring pressure even on our progressive brothers and sisters,” declared West. “We want to get them to see that even though they represent the best of the Democratic Party, that party itself has a certain rot at the center of it. And that’s corporate money. And that’s corporate power.” Celebrating the announcement after the show, West tweeted, “We are proud members of the Advisory Council for the People’s Party.”

The idea of forcing a vote on Medicare for all has gained enormous traction and enthusiasm in the progressive movement since Dore introduced it on his show three weeks ago. It exploded in popularity last week after NFL Chargers running back Justin Jackson confronted Rep. Alexandria Ocasio-Cortez about it on Twitter. Ocasio-Cortez admitted that it would succeed in achieving a floor vote but said that she still opposes it. She argued that the leverage was best used to get committee assignments and PayGo exemptions.

“There is a rumbling in America. The People’s Party is rising from the ashes of a failed state,” said Nick Brana, national coordinator with the Movement for a People’s Party. “We’re running for Congress in 2022 and you can be sure that every single People’s Party Representative will support Medicare for all — because they won’t answer to Pelosi and the Democratic Party.”

The People’s Party is growing in leaps and bounds. This month it officially filed in Maine for the first state party. Two weeks ago it welcomed Mike McCorkle, the chair of the Progressive Democrats of Colorado, who left the party to join MPP. It also launched the People’s Podcast streaming to several platforms, with an inaugural episode on the climate crisis. In August it hosted The People’s Convention, which was viewed more than a million times and was #2 top trending nationally.

“The People’s Party is an idea whose time has come,” said Brana.

5 Unrivaled Benefits Surfing Can Bring to Your Life by Cory R. Cole