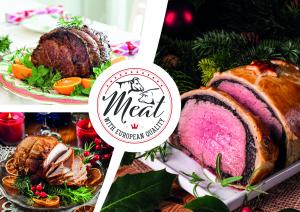 A mix of Christmas meat dishes with a European pedigree

Few people know that today’s American Christmas-time culinary habits were shaped mainly by customs of colonists and immigrants from Europe.

WARSAW, MAZOWIECKIE, POLAND, December 21, 2020 /EINPresswire.com/ — Christmas is a special time when we all celebrate with our loved ones. One of the best ways to celebrate is to enjoy a delicious meal together. Few people know that today’s American Christmas -time culinary habits were shaped mainly by customs from Europe. The dishes served in America on Christmas Day are a mixture of meals prepared in the past by colonists from the UK and immigrants from European countries such as Germany, Ireland, Sweden and Poland.

Roasted turkey, goose, Christmas ham or beef Wellington are just a few examples of many different delicacies you can find on the Christmas table. Not many people can imagine Christmas without a hearty meal or a decorated tree. It was not until the beginning of the 17th century that Christmas traditions came to America with European colonists. It is worth mentioning that Christmas in America has not always been so popular – in some regions, such as Boston, between 1659 and 1681 there was a fine in place for celebrating Christmas . Some of the first written sources on Christmas mention European-style pork and beef dishes . These dishes gained particular recognition in the nineteenth century thanks to the growing popularity of the “Christmas Eve Story”, which promoted family values and spending time together at a festive meal . Christmas was permanently added to the list of federal holidays on 26 July 1870. The culmination of Christmas’s adaptation in America was the setting up of a Christmas tree at the Rockefeller Center in 1931. It is worth mentioning that the tree decorating tradition in Europe began over 1000 years earlier.

One of the first dishes mentioned in written sources, still popular today, is glazed ham and beef ribs – mostly called the Prime Rib. Red meat dishes are often preferred over turkey, which is mainly associated with Thanksgiving . Glazed ham needs to be prepared in a specific way, in particular with regard to the marinade, which gives it its unique colour and texture. It is assumed that the tradition of this dish dates back to the first millennium, when wild boars were hunted in Europe during the winter solstice. Christmas ham is most often marinated in mustard and brown sugar (¼ glass each, horseradish or honey can also be used) , which gives it a unique, dark brown colour. Decorative ham incisions are very popular and make it easier to share the dish at the table. Glazed ham goes well with a large number of side dishes, but mashed potatoes with garlic, rice, spinach and green peas are the most often used.

The popularity of beef at Christmas, especially ribs, comes from the UK. Interestingly, this dish is considered to be one of the most important symbols of this country. These days this dish is popular not only in the US and Canada, but also in other former regions of the British Empire. Prime Rib, also often referred to as the Christmas Roast, is a popular roast of beef ribs. The process of preparing this dish is very simple – the ribs are placed in the oven by resting them on the bones, which does not allow the meat to be in direct contact with the hot metal. No direct contact means that the meat retains its juiciness and it is difficult to burn it. Another Christmas beef dish is Beef Wellington – a piece of beef tenderloin surrounded by a layer of pâté and mushrooms, coated in a French pastry.

Since the beginning of the 20th century, Beef Wellington has become a luxury dish in America, served in the best restaurants.

The culinary tradition of Christmas in America has very strong European roots. European beef and pork can be a great raw material for preparing tasty and nutritious dishes for the whole family – after all, these meats served as the base for recipes that shaped the American culture and the way we celebrate the holidays. How about trying out recipes for tasty dishes based on European pork and beef, which can be found on our website.

ABOUT UPEMI:
Union of Producers and Employers of Meat Industry (UPEMI) is a modern and dynamic organisation which integrates the community of pork and beef producers in Europe. The mission of UPEMI is to promote European meat on foreign markets and to provide reliable and comprehensive information on meat quality, high standards and production systems in place in the European Union. UPEMI brings together companies from all stages of production, which share the values of fair animal breeding and production of high-quality pork and beef.

Meat with European quality campaign
Union of Producers and Employers of Meat Industry
+48 22 858 74 58
email us here
Visit us on social media:
Facebook
LinkedIn