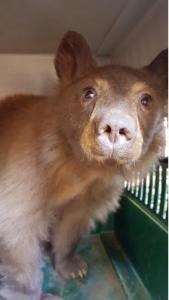 The Center for a Humane Economy reacted to news from Jackson County District Attorney Fire Chief Gene Davies won’t be prosecuted for helping a young bear.

ASHLAND, OREGON, UNITED STATES, April 30, 2021 /EINPresswire.com/ — The Center for a Humane economy reacted to today’s announcement from the Jackson County District Attorney that Greensprings Fire Chief Gene Davies will not be prosecuted for rendering aid to a young black bear on April 7th. Chief Davies was cited on April 8th by Oregon State Police (OSP) for his role in rescuing the animal from a busy public highway.

“We applaud the Jackson County District Attorney for not pursuing charges against fire chief Davies,” said Scott Beckstead, director of campaigns for the Center for a Humane Economy. “The man deserves a medal – not a citation — for coming to the aid of an animal in distress. The Oregon State Police bringing charges against him was akin to filing vandalism charges against a man breaking a window pane on a car to pull an injured man out of a burning car.”
On April 8, the day after the chief rescued the bear from the roadway, Oregon Department of Fish and Wildlife and OSP officers arrived at the Chief’s his residence, seized the bear, and issued him a citation for criminal negligence and possession of wildlife without a permit. Despite being informed that licensed accommodations had been located for the bear, ODFW shot and killed the bear cub.

Despite public statements by ODFW that the bear was “emaciated,” photos and witness accounts depict the animal as small, but otherwise healthy.

“We are thrilled that the District Attorney understands Chief Davies’ good intentions and his desire to do the right thing by everyone involved, especially the bear cub,” said Beckstead continued. “This is not, however, the end of the conversation. This case underscores the need for fundamental reform in how our state agencies respond to wildlife in need and the good-hearted people who step up to try and help.”

Beckstead said a hearing will be held before the House Committee on Agriculture and Natural Resources on Thursday, May 6, to discuss the incident and propose a path to begin efforts at reform. Chief Davies is expected to testify at the hearing.

The Center for a Humane Economy does warn citizens to refrain, except in extreme circumstances, from ever taking animals from the wild. Often times, juvenile animals are only temporarily separated from their mother, and it’s best to stay clear of healthy wild animals of any age.