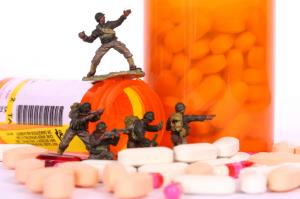 While remembering the fallen on the 20th anniversary of the 9/11 attacks, CCHR reveals tragic consequences for vets in the War Against Terrorism. VHA spent $2.4 billion (2015-2019) on psychotropic meds, with 4.2 million vets taking them in 2019.

While remembering the fallen on the 20th anniversary of the 9/11 attacks, CCHR reveals tragic consequences for vets in the War Against Terrorism.

LOS ANGELES, CALIFORNIA, UNITED STATES, September 14, 2021 /EINPresswire.com/ — On the 20th anniversary of the 9/11 terrorist attacks, the Citizens Commission on Human Rights International, a mental health industry watchdog paid tribute to those who lost their lives in the tragedy and to the families of the victims. It also recognized Americans lost in the subsequent War Against Terrorism but raised concerns about veterans potentially bearing the brunt of ineffective and dangerous mental health treatment.
In July 2021, CCHR filed an FOIA request with the Veterans Health Administration (VHA) about expenditures on and number of vets prescribed psychotropic meds. This month, the VHA revealed that between 2015 and 2019, it spent $2,414,495,320 on psychotropics, with 4,231,204 vets taking them in 2019—up from 4,120,232 in 2015.

Earlier criticism levelled at the cocktails of mind-altering meds prescribed vets and active soldiers linked antidepressants in particular to suicide among this population. From 2005 to 2011, the Department of Defense (DOD) had increased its prescriptions of psychiatric drugs by nearly seven times—over 30 times faster than in the civilian population.

In 2013, Military Times reported one in six American service members was on at least one psychiatric medication.[1] Over a ten-year period, the U.S. government spent more than $4.5 billion on these for active military members and veterans.[2] The VA reported veteran suicides running at about 8,000 a year. The DOD said the number of military suicides in 2012 had far exceeded the total of those who were killed in battle.[3]

The Food and Drug Administration has a black box warning on antidepressants due to the risk of suicide in those up to age 24. However, medical experts say the suicide risk is potential for all ages.

With antidepressants linked to suicides and cocktails of antipsychotics sourced to sudden deaths of veterans, returning defenders of freedom face a kind of psycho-pharmacological firing squad, Jan Eastgate, president of CCHR says.[4]

In June 2021, Brown University’s “Costs of War” report revealed continuing startling trends in suicide rates of veterans who served in wars after the 9/11 terror attacks as well as deployments in five other spots around the world. According to the report, more veterans of the terror wars have killed themselves than those who died in combat. Active service member suicide rates have grown during the Global War on Terror to surpass any service member suicide rates since before World War II.[5]

However, the study does not address how the suicide increases could be linked to psychotropic drug usage.[6]

One law firm described the VHA’s reliance upon psychiatric medications. Many of these, the firm’s website says, “have been shown to cause side effects, as well as the potential to cause secondary disabilities in those who take them. Often, veterans are unaware that their new health problems are related to their already service-connected disability.” The drugs “can also have very serious behavioral consequences, including increased violent behavior and suicide. Doctors and researchers are still not entirely sure what causes these dramatic changes in behavior, but many perpetrators of violent crimes in recent years, including acts by veterans.”[7]

Dr. Frederic Sautter, retired head of the family mental health program at New Orleans VA, said that hundreds of Iraq and Afghanistan vets from 2009 to 2019 were not properly assessed for TBI, and left undiagnosed, can lead to suicide. Research shows vets with TBI are twice as likely to die by suicide.[9]

Physicians believe the effects of a common malaria medication, mefloquine, was misdiagnosed as PTSD. The FDA warns it can cause permanent psychiatric and neurological side effects.[10] Soldiers took the drug once a week – a ritual that gave rise to terms like “Mefloquine Monday,” “Whacko Wednesday” and “Psycho Sunday.”[11]

[8] “TBI May Be Misdiagnosed as PTSD,” Dolman Law Group, http://www.tampabaybraininjuryblog.com/2017/11/tbi-may-be-misdiagnosed-as-ptsd/

[11] Ken Olsen, “An anti-malaria drug may have inflicted permanent neurological injuries on some servicemembers,” The American Legion, 18 July 2019, https://www.legion.org/magazine/246284/mefloquine-mondays