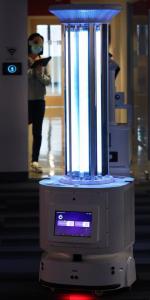 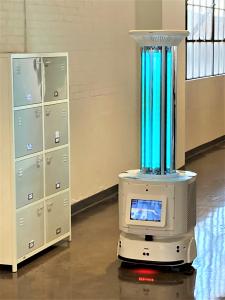 Black-I Environmental has branded its robots under the PureTech label.

Over a five year period, labor costs associated with a manual UV-C device would amount to $329,230 versus $12,045 for the autonomous robot.”
— Brian Hart, CEO, Black-i Environmental

Documenting the revolution is an informative and fascinating Case Study prepared by a highly respected robotics company, Black-I Environmental, a leader in the industry since 2008. The Case Study features how a well known hospital in Rochester, NY, working with a local professional cleaning company, CleanCraft, has dramatically cut the cost of labor while improving it’s already high standards of cleanliness. https://www.blackienvironmental.com/case-study-safety-first/
The revolution initially was a response to the coronavirus pandemic, which had a profound effect on hospitals. Many patients, including those requiring surgery, chemotherapy and other treatment in a hospital setting, avoided health care facilities. That in turn motivated hospital staff to look for ways to cut expenses while simultaneously improving sanitizing practices.

The traditional way of sanitizing space often relied on portable ultraviolet devices that had to be moved by staff to different areas of a room, often five times or more. That meant staff had to constantly shuttle into and out of the room, as ultraviolet light is hazardous to humans. It also required that difficult sections of a room such as corners or shadowy areas be given special treatment, which increased staff time. The autonomous robot does virtually every step automatically.

How much can an autonomous robot save? A cleaning person being paid an average of $13.19/hour responsible for sanitizing 10 single patient rooms using a manual UV-C device positioned five times for 10 minutes each would cost $180.40. For an autonomous robot, the labor cost would be $6.60. Over a five year period, labor costs associated with a manual UV-C device would amount to $329,230 versus $12,045 for the autonomous robot. A hospital — any organization — could buy or lease many autonomous robots for the $317,185 difference. And get the job done much faster and better. In the Rochester hospital’s case, facilities management wanted to deploy the robot five days a week. Within a month, it requested deployment seven days a week, it was so successful.

The Case Study features other examples of hospitals that have proved that autonomous robots can save hundreds thousands of dollars depending on the size of the facility. It also suggests that hotels, schools, offices and other institutions can deploy autonomous robots and get the same dramatic savings.

Black-I’s autonomous robot deactivates 99-plus percent of coronavirus, bacteria, fungi and other pathogens as well as hospital acquired infections while its HEPA filters purify the air as it moves, capturing 99.7 percent of all contaminants 0.3 microns or greater. The brains of Black-I’s robot consist of computers, cameras, laser radars and collision sensors and is extremely safe.

As to whether sales of the autonomous robots will decrease as the crisis over the coronavirus eases, quite the contrary say the experts. They assert that we can expect more pandemics in the future, and in any event, hospitals and other institutions have a very different definition of clean, and it’s not the “clean” of 2019, which is why worldwide, sales of autonomous robots continue to accelerate. The price of autonomous robots has been coming down, and in many cases cost little more than a manual UV-C device.

Black-I Environmental is part of the Black-I Robotics family of robots and robotic devices, which is well known for designing and deploying robotic systems for a variety of private companies and government agencies, including the Defense Department, Homeland Security, the Army Corps of Engineers as well as universities, including Princeton and MIT. Black-I is headquartered in Tyngsboro, Massachusetts, just outside Boston, a center of the robotics industry.

Training of CleanCraft’s staff took approximately 20-hours, and the robot fit easily into the cleaning company’s existing processes. In fact, as the Case Study documents, staff loved working with the new technology. Trainees learned to use a tablet to control the robot, map a room, including beds, equipment, etc., then how to program the robot to avoid the obstacles. It clearly was a win for the hospital and its professional cleaning partner and, most importantly, health care patients. For the full story, link to the Case Study.