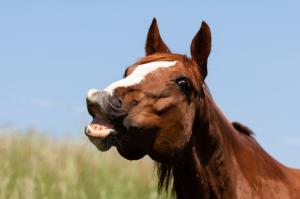 Ending Transport of Horses Across State and National Lines Will Have the Effect of Banning the Trade, Notes Animal Wellness Action

We applaud Reps. Carter, Fitzpatrick, and Katko for their tremendous leadership and work to protect the horses whose backs this country was built upon.”
— Marty Irby, executive director at Animal Wellness Action

WASHINGTON, DC, USA, June 8, 2021 /EINPresswire.com/ — Today, U.S. Reps. Troy Carter, D-La., Brian Fitzpatrick, R-Pa., and John Katko, R-N.Y., introduced an amendment to H.R. 3684, the Investing in a New Vision for the Environment and Surface Transportation in America (INVEST) Act, that would ban the transportation of horses across state lines or to Canada or Mexico for slaughter for human consumption, effectively putting an end to a cruel and predatory trade that has long been a top target of animal protection groups.
Horses are revered and cherished in the United States, and 80 percent of Americans oppose the slaughter of horses for human consumption. As public awareness has grown of the inherent cruelty involved in the horse slaughter industry, calls for a federal response have grown louder as the federal Bureau of Land Management (BLM) has been implicated in a suspect adoption plan that is allowing “adopters” to rake in profits by selling horses and burros to slaughter.

“Our iconic American equines drove commerce and the development of infrastructure in the first 150 years of the republic, and it’s fitting that today’s infrastructure bill pay a debt to them by halting their ruthless exploitation by kill-buyers to cart them off to Canada and Mexico for butchering.” said Marty Irby, executive director at Animal Wellness Action, who was recently honored by Her Majesty, Queen Elizabeth, II for his work to protect horses. “We applaud Reps. Carter, Fitzpatrick, and Katko for their tremendous leadership and work to protect the horses whose backs this country was built upon.”

“Rep. Troy Carter was a leader on animal welfare issues in the Louisiana State Senate, and he is picking right back up by leading the amendment to stop the commerce in horses for slaughter,” said Wayne Pacelle, president of the Center for a Humane Economy, in lauding Carter and Reps. Fitzpatrick and Katko for carrying this amendment. “Business and enterprise in our nation must be robust, but it must also be humane. Shedding horse slaughter is good for the economy and character of our nation.”

“After years of pressing for a ban on the slaughter of our American horses, I am thrilled with this latest development and applaud our leadership in Washington for their commitment to the issue,” said Staci Hancock, co-founder of the Water, Hay, Oats Alliance, and whose Stone Farm has raised Three Kentucky Derby winners. “It is time to end this brutal practice in the U.S. once and for all. Horses are bred for sport, competition, and companionship, not to be part of the food chain. As owners and breeders we must be the stewards of our horses’ safety and welfare. They look to us for their care and protection and to allow them to go to a horrific slaughter is unconscionable.”

“We are so very excited to have the incredible support and commitment from Reps. Carter, Katko, and Fitzpatrick in our efforts to end the ongoing extortion and destruction of our American athletes in the slaughter pipeline,” said Michelle Crawford, CEO of Crawford Farms. “Our horses give us their heart and soul throughout their careers and deserve to have an aftercare plan in place, not a trip to a kill pen and slaughterhouse so that they can become a delicacy in another country.”

“It is astounding to me that our country’s beloved wild horses, who are supposed to be federally protected, are being sent to unimaginable slaughter in Mexico and Canada,” said Ashley Avis, the director behind Disney’s newly released Black Beauty film and president of the Wild Beauty Foundation. “These are mares, foals, pregnant horses, healthy horses. How is there no accountability? The abuse of the BLM’s adoption incentive program, where individuals receive $1,000 to give a mustang a home, has instead driven countless wild horses to slaughter across our borders. The system is being abused for profit, and that needs to end.”

“There’s nothing humane about slaughtering horses. The entire slaughter pipeline is rife with cruelty, including the conditions during transport,” said Allondra Stevens, founder of Horses For Life Foundation. “After being purchased by kill buyers, the horses are trucked long distances to Mexico or Canada without food, water or rest. Many are injured or die in transit. A prohibition on hauling slaughter-bound horses across the USA and over our borders is long overdue. We thank U.S. Representatives Carter, Fitzpatrick, and Katko for leading this vital amendment, which will spare the suffering and lives of thousands of wild and domestic horses.”

“We applaud Reps. Carter, Katko, and Fitzpatrick for their commitment to prevent the horses we care so deeply about from ending up in the slaughter pipeline,” said Freddie Hudson, president of the U.S. Harness Racing Alumni Association. “There’s no excuse for allowing the horses who have served us in work and sport to end up as dinner fare on foreign plates, and we must ensure safety and peace in their retirement or end of life circumstances.”

“The brutality of horse slaughter has no bounds. I’ve been rescuing horses for 17 years in New Mexico and it’s business as usual to eyewitness the horrific conditions and treatment the horses are subjected to,” said Debbie Coburn, founder of Four Corners Equine Rescue. “No horse is spared, not even wild ones. Recently I bore witness to wild stallions that were castrated without the benefit of drugs and were immediately thrown onto a trailer headed for Mexico. We have to stop this. No horse should have to endure the abuse and cruelty of the slaughter pipeline.”

Transport of horses for slaughter is unsafe and has caused multiple serious accidents on American highways. The list is long of serious accidents on American highways involving trucks loaded with horses bound for slaughter. Most of these involve horrific injuries to and deaths of horses on the trucks. As recently as October 2020, 14 horses were killed and 11 badly injured when a truck driving the animals to slaughter flipped on a highway in Franklin County, Missouri. Similar accidents have happened over the years, and in most, motorists had to avoid the accident and, in some cases, encountered terrified and injured horses running loose in the lanes of traffic. Similarly, in 2017, a truck belonging to the infamous kill buyers who own one of the nation’s largest horse slaughter holding facilities in Bastrop, Louisiana, was involved in a terrible crash that led to the deaths of 19 horses.

While horse slaughter does not currently occur on U.S. soil due to a de facto ban achieved through the appropriations process, more than 70,000 domestic and wild horses are shipped to Mexico and Canada each year to be slaughtered for human consumption in those countries, Europe, Asia, and other parts of the world.

Stand-alone legislation that would permanently ban both the transportation of slaughter-bound horses and slaughter itself – the SAFE Act – was recently introduced by Reps. Vern Buchanan R-Fla., and Jan Schakowsky, D-Ill., but despite the passage of a similar bill fifteen years ago, and the majority of House Members cosponsoring the measure in the 116th Congress, enactment of the legislation continues to be an uphill battle due to industrial agriculture interests and pro-slaughter Members of Congress.

Animal Wellness Action (Action) is a Washington, D.C.-based 501(c)(4) organization with a mission of helping animals by promoting legal standards forbidding cruelty. We champion causes that alleviate the suffering of companion animals, farm animals, and wildlife. We advocate for policies to stop dogfighting and cockfighting and other forms of malicious cruelty and to confront factory farming and other systemic forms of animal exploitation. To prevent cruelty, we promote enacting good public policies, and we work to enforce those policies. To enact good laws, we must elect good lawmakers, and that’s why we remind voters which candidates care about our issues and which ones don’t. We believe helping animals helps us all. The

Animal Wellness Foundation (Foundation) is a Los Angeles-based private charitable organization with a mission of helping animals by making veterinary care available to everyone with a pet, regardless of economic ability. We organize rescue efforts and medical services for dogs and cats in need and help homeless pets find a loving caregiver. We are advocates for getting veterinarians to the front lines of the animal welfare movement; promoting responsible pet ownership; and vaccinating animals against infectious diseases such as distemper. We also support policies that prevent animal cruelty and that alleviate suffering. We believe helping animals helps us all.

Horses For Life Foundation is an advocacy and education group dedicated to ending the slaughter of American horses, protecting wild horses and burros on public lands, and ending equine abuse and neglect through advocacy, public education, and legislative reform.

The Center for a Humane Economy (“the Center”) is a non-profit organization that focuses on influencing the conduct of corporations to forge a humane economic order. The first organization of its kind in the animal protection movement, the Center encourages businesses to honor their social responsibilities in a culture where consumers, investors, and other key stakeholders abhor cruelty and the degradation of the environment and embrace innovation as a means of eliminating both.