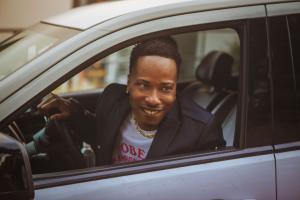 Crafting his own unique identity that mixes and marries a range of vibrant rhythms and sounds, eclectic artist Jyrus Melody is captivating hearts and souls.

Similarly, other singles in his discography, such as “HOLD ON”, showcase an inimitable musical vibe, which only Jyrus can fully encapsulate, traversing through the richness of Dance, Pop, and Reggae music.

An eclectic artist, Jyrus continues his formidable appeal across a seasoned solo career as a performer, writer and producer, with his single “HOLD ON” bringing along a unique sound and “feel-good” message of joy and inclusion to the world. Apart from stirring and memorable musical compositions, Jyrus Melody is also a powerhouse when it comes to songwriting, showcasing a uniqueness in lyricism on a string of released singles.

The artist’s highly anticipated recently released EP “WHO BAD LIKE ME” succeeds in highlighting his raw and relatable craft that makes him stand out from the crowd, in an industry that is rife with up-and-coming artists trying to hit the right notes.

Go to Www.Jyrusmelodymusic.rocks to download and buy Jyrus Melody’s music, and make sure to follow him on Instagram/Facebook/Twitter. For interviews, reviews and collaborations, feel free to reach the artist out through email.

Jyrus Melody is an up-and-coming Trinidadian singer, songwriter and producer, who is set to soar in the diverse musical world. Curating enlivening and electric musical compositions, spread across the genres of Dance, Pop, and Reggae for over 10 years, the eclectic artist remains powered by the spirit of music and an unending passion for the art.

Inspired by his father and brother playing a broad selection of musical compositions, the growing artist set out on a mission to create songs that would give him the same feeling that he felt by music.