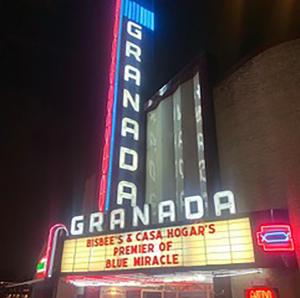 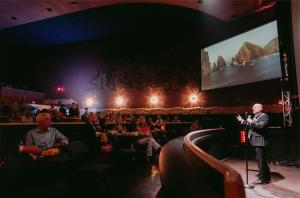 Wayne Bisbee welcomes the large crowd at the beginning of showing. 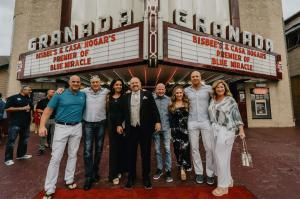 Jolly moviegoers arrive for the premier showing of “B;ue Miracle”

The official trailer for Blue Miracle can be found at https://www.netflix.com/title/81298682.

The night’s event included a phenomenal evening of cocktails, popcorn and movie watching with 200 members of the Bisbee’s and Elite’s family and friends. However, it quickly turned into an impromptu fundraiser for the Casa Hogar Orphanage upon which the Blue Miracle movie is based. By the time it was over, an incredible $128,638. had been raised!

“We had not planned this event to be a fundraiser” host Wayne Bisbee noted, “but just before we began, one of Casa Hogar’s annual supporters offered to match any other donations up to $100,000. with an equal amount and that was all that was needed to be said. The great crowd in the beautiful Granada Theater setting generously donated $64,319. which was then doubled by the matching donor. This is a HUGE amount of money for the orphans” he continued.

Released on the night of the Bisbee’s screening party, Blue Miracle is a Netflix movie featuring several great stars including Dennis Quaid and Jimmy Gonzales. It is based on the incredibly true story of the cash strapped Casa Hogar Orphanage winning the 2014 Bisbee’s Black & Blue Marlin Tournament that was held in Cabo San Lucas after hurricane Odile destroyed the entire Mexican State of Baja California Sur one month before the Bisbee’s tournament was scheduled. To get the town back on its feet and working again and to keep the annual tradition of the world’s richest fishing tournament alive, tournament supporters came up with a program that offered free base entry fees to teams that would hire local charter boats to fish in the tournament. One of these entries was offered to the local Casa Hogar Orphanage who ended up winning this, the world’s most prestigious fishing event, plus the $258,325. in prize money.

Without spoiling the movie, we’ll say that it was “based on this true story.” However, the producers did take a fair amount of Hollywood license when creating Quaid’s boat captain character by having him be a two-time winner of the Bisbee’s Black & Blue. In reality, to this day, there has never been a two-time winning team.

So, to Dennis Quaid, Jimmy Gonzales, and the other actors: In a fun effort that could turn this fictitious movie character element into reality, the Bisbee’s are offering a free base entry into this year’s October tournament. This is provided they fish with Omar (the real-life orphanage director portrayed by Gonzales in the movie) and some of the real orphanage kids on their team. If they take the Bisbee’s up on this offer and were to win, Hollywood would become reality in this truly epic event because this new Team Casa Hogar would become the first team in history to win this famous tournament twice… AND they would make a ton of money for the orphanage at the same time!

“What do you say Mr. Quaid and Mr. Gonzales? The orphans could sure use the prize money, and you’ll have a great time in Cabo. We’ll even find a way to get your team’s boat charter sponsored.” Bisbee promised.

About:
The Bisbee organization (Bisbees.com) has been presenting the Bisbee’s Black & Blue Marlin Tournament in Cabo San Lucas, Mexico for 40 years. It is the world’s richest fishing event that awards over $4 Million annually. Over the decades, they have awarded over $100 Million in prizes which is an amount no other fishing tournament comes close to. Currently the Bisbee’s operate three offshore tournaments in Los Cabos, and each of the three all offer over $1 Million in prizes annually, with anglers participating from all 50 U.S. States and dozens of other countries.

Casa Hogar of Cabo San Lucas (CasaHogarCabo.com) is a privately funded social assistance center for boys and girls that need a safe place to live away from the family home. The Casa Hogar campus is currently housing 32 children, plus young adults in transition who have aged out of the system.

Blue Miracle is a movie released by Netflix on May 27th, 2021 that is based on a true story of a cash- strapped orphanage in Cabo San Lucas, Mexico winning the richest fishing tournament in the world after a devastating hurricane destroyed Cabo in 2014. The cast includes Dennis Quaid, Jimmy Gonzales, Bruce McGill, Dana Wheeler-Nicholson, Nathan Arenas, Anthony Gonzalez, Raymond Cruz and Fernanda Urrejola.

Elite Financial Management is a Dallas-based full-service wealth management firm. They serve high net worth clients across the United States including businesses, foundations, endowments, and non-profits. Their mission is to help their clients navigate the complexities of investments, financial planning, and tax and estate issues.