The #BillsMafia turned a Twitter beef into an act of philanthropy that has sparked more than $10,000 in donations to the National Diaper Bank Network (NDBN). 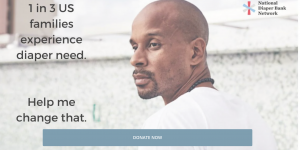 ESPN’s Bomani Jones created and introduced on his show the url ILOVEJOSHALLEN.COM, which directs people to Jones’ ongoing fundraising page that highlights the prevalence of #diaperneed in the US and his call to support the National Diaper Bank Network.

The #BillsMafia has donated more than $10,000 to the National Diaper Bank Network in a show of support for Bills’ quarterback Josh Allen.

BUFFALO , NEW YORK, UNITED STATES, December 22, 2020 /EINPresswire.com/ — Last week the #BillsMafia turned a Twitter beef into an act of philanthropy that has sparked more than $10,000 in donations to the National Diaper Bank Network (NDBN).

Because of the generosity of Bills fans, NDBN is sending money back into the Buffalo community by awarding a $5,000 grant to Every Bottom Covered, a local nonprofit that distributes diapers to children and families in need.

The donations came about as a result of comments critical of Bills’ quarterback Josh Allen that aired on the podcast of ESPN’s Bomani Jones. In a show of support for Allen, Bills fans began donating to the National Diaper Bank Network, a charity supported by Jones. In turn, Jones created and introduced on his show the url ILOVEJOSHALLEN.COM, which directs people to Jones’ ongoing fundraising page that highlights the prevalence of #diaperneed in the US and his call to support the National Diaper Bank Network.

“These donations were unexpected holiday gifts, but very much needed, particularly because of the COVID crisis,” said Joanne Samuel Goldblum, CEO of the National Diaper Bank Network. “We appreciate Bomani’s continued support for our work, and are tremendously grateful to Bills fans as well. So, it’s fitting that we share the donations with our member diaper bank program in Buffalo, Every Bottom Covered.”

The funds couldn’t come at a more appropriate time for Every Bottom Covered said Executive Director and Founder Raziya Hill. “We are moving into a new warehouse and office space in January, which will help us support the unprecedented need for diapers in our community.”

“Prior to the pandemic, 1 in 3 US families struggled to provide diapers for their baby,” said Hill. “With so many people unemployed today, the need is greater than ever. We are doing our best to keep up with the demand for diapers, which has increased more than 35% in 2020 compared to last year. But, we cannot do what we do without community support from people like the Bills Mafia. We need ongoing donations of diapers, dollars and time to ensure that Buffalo-area children have the material basic necessities they need to thrive.”

Also in January 2021, Every Bottom Covered plans to expand its services and begin providing diapers to families in eight counties in Western New York including, Erie, Niagara, Chautauqua, Cattaraugus, Allegany, Wyoming, Genesee and Orleans. More information about Every Bottom Covered, and how to get involved, is available online at everybottomcovered.org.

About the National Diaper Bank Network

The National Diaper Bank Network leads (NDBN) a nationwide movement dedicated to helping individuals, children and families access the basic necessities they require to thrive and reach their full potential…including clean, dry diapers, period supplies and other basic needs. Launched in 2011 with the support of founding sponsor Huggies®, NDBN is dedicated to creating awareness, providing assistance and building community to #EndDiaperNeed in the US. Its active membership includes more than 240 diaper banks, diaper pantries, and food banks serving local communities in all 50 US states, the District of Columbia and Puerto Rico. More information on NDBN and diaper need is available at nationaldiaperbanknetwork.org, and on Twitter (@DiaperNetwork), Instagram (@DiaperNetwork) and Facebook (facebook.com/NationalDiaperBankNetwork).