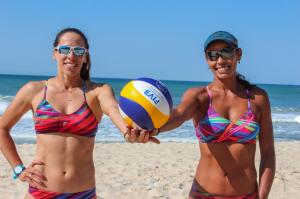 RIO DE JANEIRO, RIO DE JANEIRO, BRASIL, December 28, 2020 /EINPresswire.com/ — As a new Olympic year is coming and for the victorious Brazilian beach volleyball, and the qualified women’s doubles are already set for the Tokyo Games: Ágatha / Duda and Ana Patrícia / Rebecca, new names may appear for the next cycle, aiming at Paris 2024.

Protagonist of many good old memories, a two-time Olympic champion on the court appears now in the rearview mirror of many players who have been in the sand for some time.

With a more than respectable curriculum, Paula Pequeno arrives at beach volleyball willing to learn from those who have more experience in the sport. Taiana Lima also has a winning baggage in the sport. The union between them has everything to add on a two-way road.

– My transition is still going on. I’ve only been in this new modality for four months. And the difficulties are many, because it is a totally different sport, with an uneven floor, the climate factor, the shortcuts and the malice of the game that I will only learn with time. It is a transition that requires a lot of effort and patience. I’ve decided to train with Taiana to speed up my learning process, and three days later she invited me to be her partner. It was everything I wanted and needed; someone experienced to shorten my path. We train at Recreio (Recreio dos Bandeirantes, west of RJ), where Taiana is based – said Paula.

Taiana sees the companion’s arrival as beneficial for the sport, “Paula’s arrival represents greater visibility for beach volleyball. For those who know our sport, so victorious, agree that it’s still not seen the way it deserves. Paula can help a lot in this process ”.

Voted the best player in the world in 2005 and 2008, Paula Pequeno is the only Brazilian athlete to win the title of MVP (best player) in an edition of the Olympic Games. In 2001 she was a youth world champion and won gold at the Grand Prix and at the Pan American Games in Guadalajara / 2011. Abroad, Paula won the national championship of Russia in 2009/2010. But of course, her career also had its upsets.

– I had three surgeries on my left knee, one of them with a serious injury, which took me away from the Athens / 2004 Games, but I made a very good recovery and since then I have no problem, I am fully recovered clinically. This knee is very resilient and has helped me a lot in the tough battle of my career.
Today the pair has a good multidisciplinary structure, consisting of a stunt double and coach, two training assistants and a nutritionist.

– A multidisciplinary team is essential for a high performance athlete. Our coach, Ricardo Moacir, has a degree in physical education and a postgraduate degree in exercise physiology from the São Paulo School of Medicine and has extensive professional experience at the national and international levels. He works together with all the other professionals, including nutritionist Marcella Amar (who was part of the Brazilian swimming team and works with several top athletes such as Nicholas Santos, swimmer from Brazil), with whom I have been working for many years. The nutritional part is super important in the process of achieving high performance, with a balanced diet that enables us to train and compete better and thus aim for great results. I have an open channel with Marcella to understand and always be perfecting our plan – reveals Taiana and confirmed by Paula, “nutrition is a very important factor, because beach volleyball is a sport with a great deal of stress and demand. We need to be strong, light and powerful. And for that reason, all guidance, within this complex field, which involves nutrition, recovery and muscle support is essential ”.

As for the future of the duo, as Taiana says, the road is long, “there is a whole process of adapting Paula, initially with the sport and then with the team, so it is best to think of it in small steps”. Paula totally agrees, but maintains her famous optimistic smile.

– The objective in the short term is to evolve as quickly as possible, to become increasingly competitive; in the mean time, the goal it is to start playing at international championships; and in the long run, who knows, Paris 2024.

Paula Pequeno
Gold at the Olympic Games in Beijing / 2008 and London / 2012
Silver at the World Cups in Japan 2003 and Japan 2007
Gold in the Grand Prixs of Sendai 2005 and Yokohama 2008
Silver in the Grand Prixs of Ningbo 2010 and Ningbo 2012
Silver in the 2009 Japanese Champions Cup
Gold at the 2011 Pan American Games in Guadalajara
Silver at the 2007 Pan American Games in Rio de Janeiro
Only Brazilian athlete to win the title of MVP (best player) in an edition of the Olympic Games: Beijing 2008 (7th best scorer, 4th best striker, 4th best blocker and 9th best defender)
Best striker of the 2000 South American Youth Volleyball Championship
Highlight of the Volleyball World Cup 2003
Grand Prix 2005 MVP (3rd best scorer, 9th best striker, 11th best blocker, 7th best defender and 6th best passer)
2007 South American Women’s Volleyball MVP
Best Striker of the Brazilian Superliga 2007
MVP of the Brazil Volleyball Cup – 2007 and 2008
National Champion of Russia 2010 for Zarechie Odintsovo and runner-up of the Russian Cup in 2009 for the same club.