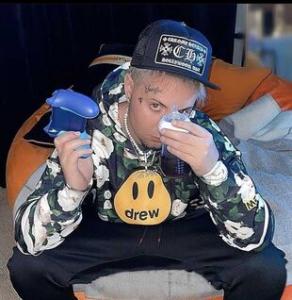 NEW YORK, USA, February 18, 2021 /EINPresswire.com/ — Today, the infamous Internet star and multi-millionaire rapper George GStar admitted that he got into a bloody fight with rappers who had been stalking him on the streets of Los Angeles. Instagram has been following the exploits of GStar, showing his lavish lifestyle, sex tapes with celebrities and bloody encounters with people who are jealous of his success. Instagram has carried alleged accusations of street fights and sabotage of his cars and residences based on rumors of illicit business dealings.

There are many parties trying to discredit GStar and his million-dollar waste management company. In addition, rumors of investments in private island real estate developments have certain unwelcome global organizations very upset with George GStar and his entourage. Sources claim criminal activity, extortion and fraud, which Mr. GStar denies.

“Everywhere I go, someone tries to start something to get me arrested or caught on video knocking people out,” said George GStar. “It has been alleged that certain people are having me followed and I can’t wait for these s@@bags to get in my face. They need to know that not only am I waiting for them to make a move, I also have some surprises that will mess them up, and film makers documenting my every move are waiting to catch them on film. I will release any fights on Instagram and show the world what happens to people who try to mess with me. Keep checking George GStar on social media and you’ll see what I’m talking about. There is a lot of competition for celebrity status. and some people I know will do anything to get rid of me.”

George GStar, or just “GStar,” has a considerable net worth and has made enemies during his rise to superstar status. He has a net worth estimated between $150-180 million, and with his stock market investments, the totals may now be ten times original projections. To date, the wealthy real estate and waste management magnate, who also dabbles in logistics ventures, holds real estate investments in Miami, Las Vegas, New York, Los Angeles, San Francisco and Costa Rica.

GStar has created a buzz and some new enemies with his next venture, the purchase of a private island and subsequent development of exclusive luxury villas around an invitation-only club for celebrities and socialites.

For more information go to https://george-gstar.fandom.com/wiki/George_GStar