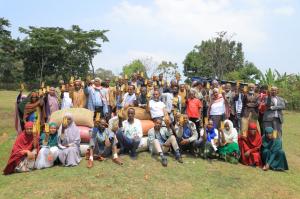 AgUnity has recently created an independent charitable entity to complement its smartphone platform for smallholder farmers called the AgriUT Foundation.

QUEENSLAND, AUSTRALIA, September 15, 2021 /EINPresswire.com/ — AgUnity is a global technology platform designed to empower remote farmers through blockchain technology. AgUnity has recently created an independent charitable entity to complement its smartphone platform for smallholder Farmers called the AgriUT Foundation. This Foundation was born out of AgUnity’s goal to help uplift the 2.6 billion people who operate in the last mile of the production cycle by providing consumers with the opportunity to directly reward smallholder farmers.

AgriUT will connect millions of international consumers to remote farming communities through a token reward system.

Did you know that research from the World Economic Forum reveals that every minute 2.3 million cups of coffee are consumed globally? Despite coffee being a multi-billion-dollar industry from which 125 million people earn a living, only $0.07 of each cup sold goes to the farmer.

David Davies (CEO and Founder at AgUnity) explains: “These farmers and farming workers are isolated from market opportunities, essential infrastructure and utilities that are all fundamental in earning enough income and being fairly compensated. This is where the AgriUT token reward system comes in.”

AgriUT Foundation’s token system will be used by consumers to reward farmers and producers through blockchain technology.

“Designed for consumers who care about product origins and social development programs, the blockchain-powered rewards token connects consumers to brands that produce ethically sourced goods,” says Davies. A further benefit according to Davies is that it also empowers brands who want to ‘do the right thing’ by committing to better earnings for the farmer while consciously engaging with their consumers.

The AgriUT token provides consumers with a secure, ethical, and responsible way to connect with remote farmers; while giving consumers confidence that the products they purchase have a genuine ethical or sustainable origin.

“We’re delighted to launch the new AgriUT token through the AgriUT Foundation. This token will enable consumers to show appreciation to the farmers who are producing their much-loved goods. We know there is an increased interest in product origins and improving the situation for smallholder farmers throughout the world, and this token not only gives an opportunity for consumers to learn more about the farmers whose goods they consume, but it also provides them with a secure and ethical way to reward them,” says Davies.

“Consumers in developed countries are becoming increasingly aware of the challenges faced by small farmers. As the movement to buy ethical and responsible goods continues to grow, AgriUT brings trust and places farmer rewards in the palm of the consumer. By using modern and advanced technology, we have created a bridge between farmers and consumers to improve income opportunities for remote communities,” says Paget Hargreaves, CEO, AgriUT Foundation.

The AgriUT Foundation is governed by a board independent of AgUnity.

About AgUnity
AgUnity is a global technology platform empowering thousands of organisations working toward UN SDGs to connect the last mile. AgUnity addresses issues of poor connectivity, a lack of digital literacy, and a lack of trust in developing countries, by developing a smartphone and blockchain-based solution for the world’s 2-billion last mile farmers. AgUnity’s simple mobile product enables cooperation and connects smallholder farmers with the services they need.
For more information, visit: www.agunity.com.

About AgriUT Foundation
AgriUT Foundation is the independent charitable entity originally created by AgUnity. AgUnity is the global fintech innovator who has developed a blockchain-based solution for the world’s 2 billion last mile farmers. AgriUT’s mission is to create a globally scalable, distributed and incentivised system that connects millions of international consumers to remote farmer communities through direct interactions. AgriUT Foundation has created a digital token that puts farmer rewards in the palm of the consumer’s hand.
Find out more: www.agriut.org