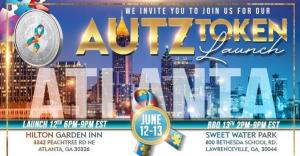 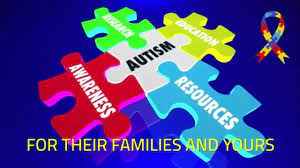 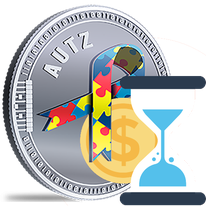 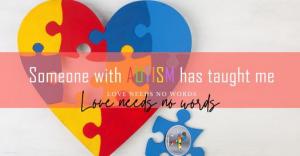 The AUTZ Token for the autism community launches with a June 12th event at Atlanta’s Hilton Garden Inn and a June 13th barbecue at Sweet Water Park.

ATLANTA, GEORGIA, UNITED STATES, June 11, 2021 /EINPresswire.com/ — On June 12, from 6-9 p.m., the AUTZ token will celebrate its official launch at the Hilton Garden Inn in Atlanta. The next day, organizers will celebrate the launch with a barbecue from 2-9 p.m. at Sweet Water Park in Lawrenceville, GA. Free tickets for both events are available online. An ambitious project intent on aiding the autism community, the AUTZ token organizers intend to make a splash as the week’s top crypto news story. With so many people searching for the next cryptocurrency to buy, the AUTZ token provides an option with additional philanthropic benefits.

The AUTZ token is a new cryptocurrency that seeks to directly aid people with autism spectrum disorder (ASD). By harnessing the innovative potential of public blockchain infrastructure, the new token will remove rent-seeking profiteers from the philanthropic process. The system will use a transactional fee distribution model to reward all coin-holders. During every transaction, 3% of the total will immediately be deducted and redistributed to all AUTZ holders according to their asset weight. Meanwhile, 10% of the total token supply will be used exclusively to benefit ASD-related charities. According to the project’s founders, this model will promote “rewarding those who reward others.”

Support for ASD causes is interwoven into the very fabric of the AUTZ system. As the AUTZ project donates to organizations in need of funding, token holders will receive a boost in their holdings. Every time a holder carries out a transaction, a percentage will immediately go to the project’s charitable fund. With this system in place, every good deed will create additional positive outcomes for other members within the system.

Every founding member of the AUTZ project has some sort of connection with ASD. This gives them a unique understanding of the challenges facing members of the community. The new AUTZ cryptocurrency will help create a sustainable economic model through which the community can support important projects.

Despite progress on many levels, life is still full of obstacles for those diagnosed with ASD and their families. “It has been a challenging and long road,” says Sarah Oteng, the Atlanta mother of a daughter with ASD. Facing social rejection, discrimination from teachers, and a lingering sense of hopelessness, Oteng eventually found the strength to persevere. She now insists that “life depends not on diagnoses but attitudes.”

AUTZ tokens could make a difference for people like Ms. Oteng. With members of the ASD community supporting both each other and charitable organizations, there will be more resources available for funding important projects. As an integrative economic solution to the many issues facing the community, the project intends to provide lasting, meaningful results.

The public sale of AUTZ tokens will begin following the launch on June 12th. The project will bring an initial quadrillion units to market, with a genesis burn rate of 30%. Buyers will be able to access the coins through typical cryptocurrency venues, including Uniswap, 1INCH, Balancer, and Folgory. Once a person has purchased any quantity of AUTZ tokens, they will immediately become full members of the project and receive their share of the 3% rewards taken from every transaction. These rewards will be paid out weekly.

The AUTZ project is continuing to seek additional partners for its charitable endeavors. The founders are encouraging organizations to reach out to them by email. Participating organizations could gain funding from their partnership with AUTZ tokens, helping raise the money that will ultimately benefit people within the ASD community.

According to the project’s recently released whitepaper, the AUTZ token’s mission has three main components. The first is to “reduce the cost burden on families with autistic children and adults.” ASD can bring major financial instability to a family, something which accesses to the AUTZ token could help alleviate. The second part of the mission calls for reducing the “cost burden on research and development.” As organizations seek to further understand ASD to help those on the spectrum, they can use additional funds to advance their research. The mission’s third component is to “provide a medium through art where autistic children will benefit.” Founders hope that the AUTZ token will give autistic artists a way to profit from their work.

ASD is a single term used to describe a wide range of neurodevelopmental disorders. This range is often imagined as a spectrum to account for the variety of ways it can affect individuals. Most people who have been diagnosed with ASD experience difficulties with communication and socialization because of atypical neural structures. These difficulties often manifest themselves in repetitive patterns of behavior.

ASD is a universal disorder, affecting people from around the world. In the United States, experts suggest that 1 in 54 children has been diagnosed with ASD. This represents a significant portion of the American population, millions of families who could stand to benefit from the solutions the AUTZ token seeks to provide.

The creators of the AUTZ project aim to serve the ASD community by subverting today’s standard economic structures. Its organizers believe that recurring economic issues, from faulty logic to suboptimal assets, are hampering efforts to aid people with ASD. They see the launch of a new cryptocurrency as a revolutionary solution.

For the AUTZ founders, blockchain cryptocurrency allows real people to enjoy tangible benefits. They see a currency guaranteed by algorithms as more trustworthy than traditional money. They also contend that the AUTZ token’s philanthropic mission and embedded rewards will serve as incentives for potential investors. As more people buy into the project, the total pool of capital will grow. This, in turn, will create more funds both for individual holders and the ASD-related charities that participate in the project.

ASD affects millions of families in the United States and around the world. The founders of the AUTZ project think their new cryptocurrency for autism help can make a big difference. It all begins with the upcoming launch.

AUTZ is a newly founded organization seeking to create a sustainable economic environment for individuals and families with the ASD community. More information can be found on the group’s website, while a recently published whitepaper provides additional details. News regarding the upcoming launch is available on the project’s Facebook page. Free tickets to the launch events are available at eventbrite.com. The organization can be reached by email at org @ autz.io.