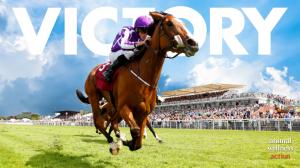 Congress rightly took action to unwind cheating and doping in Thoroughbred racing, in the first Congressional reform focused on the safety of the human and non-human athletes involved in the sport.”
— Wayne Pacelle

WASHINGTON, DC, UNITED STATES, December 21, 2020 /EINPresswire.com/ — In the biggest gain for animal welfare in the $900 billion just-released, year-end spending bill expected to be signed into law within days, the Congress added a rider to ban race-day doping of Thoroughbreds as a rider, concluding an eight-year campaign to end medication abuses leading to breakdowns and injuries and death on tracks across the nation. Animal Wellness Action (AWA), the Animal Wellness Foundation, and its partners worked to forge the coalition that swung behind the Horseracing Safety and Integrity (HISA) Act, and both AWA president Wayne Pacelle and AWA executive director Marty Irby testified on horse racing reform at the beginning and end of this long legislative battle on the topic.

The biggest disappointment in the bill was the omission of a far-reaching substitute to the Prevent All Soring Tactics (PAST) Act – a compromise between AWA and Tennessee Walking Horse industry leaders that would have made the barbaric practice of horse soring a federal felony, banned the use of action devices and tail braces in the sport, and dramatically reduced the size and weight of the shoes that the horses are forced to wear. AWA did lobby for an increase in funding for USDA enforcement of the Horse Protection Act, and the bill doubles spending levels. AWA thanks Rep. Hal Rogers, R-Ky., for his leadership on that spending increase.

“Congress rightly took action to unwind cheating and doping in Thoroughbred racing, and this is the first Congressional reform focused on the safety of the human and non-human athletes involved in the sportkeys,” said Wayne Pacelle, president of Animal Wellness Action. “But in a massive fumble, lawmakers threw up their hands after some animal welfare, veterinary, and horse industry groups raised irrational and specious concerns about the compromise measure to ban horse soring in America.”

“The passage of the Horseracing Integrity and Safety Act is the biggest news for horses in Congress in half a century, will put the welfare of the horses at the center of the enterprise, and put the sport on a level playing field that aligns with global standards,” said Marty Irby, executive director at Animal Wellness Action, who was named last week as one of The Hill’s Top Lobbyists for 2020 and testified before Congress in support of HISA in January. “We applaud Senate Majority Leader Mitch McConnell, Sen. Kirsten Gillibrand, and Reps. Paul Tonko and Andy Barr for saddling up pushing the ban on doping in Thoroughbred horse racing over the finish line and look forward to seeing.”

“After many years of working to protect racehorses from being doped, we’re thrilled that the Horseracing Integrity and Safety Act has been included in the FY21 spending bill and is on its way to being signed into law,” said Allondra Stevens, founder of Horses For Life Foundation. “The ultimate success of this legislation was due to an amended version that was introduced late in the 116th Congressional session. This strategic move exemplifies sophisticated legislating—which often requires compromising across the aisle.” Ms. Stevens went on to say, “Unfortunately, the Prevent All Soring Tactics (PAST) Act, which would have ended the egregious abuse of horse soring, was sabotaged by groups unwilling to embrace amendments offered to the bill. This is a devastating loss for those dedicated to protecting American equines. Because of petty, interpersonal politics, horses will continue to be outright tortured. This is an unacceptable failure that should never be repeated.”

In addition to the HISA and wild horse protection provisions, the year-end spending package includes additional provisions AWA and AWF lobbied for, including:

– Barring USDA from spending funds to inspect horse slaughter plants, maintaining a long-standing ban on killing horses for human consumption in this country.

– A $5 million provision championed by Rep. Andy Barr, R-Ky., co-chair of the Congressional Horse Caucus, that would provide funding for the Veterans Affairs Administration’s Adaptive Sports Grant Program, to help pair our American heroes with horses that could otherwise be sent to slaughter. Equine-assisted therapy has long been proven to alleviate pain and trauma in veterans affected by PTDS. Despite the broad, nonpartisan appeal of this program, Senate appropriators failed to include this measure in the FY21 VA spending bill released in November;

The U.S. House of Representatives passed the Horseracing Integrity and Safety Act, H.R. 1754, in September led by Reps. Paul Tonko, D-N.Y., and Andy Barr, R-Ky., that would create a uniform national standard for drug testing and ban race-day doping in U.S. horse racing. U.S. Senate Majority Leader Mitch McConnell introduced a companion measure with Sens. Kirsten Gillibrand, D-N.Y., Martha McSally, R-Ariz, and Diane Feinstein, D-Calif., that was included in the final spending package. The measure was supported by The Jockey Club, The Breeders’ Cup, The Jockey’s Guild, and all the parent organizations to all three Triple Crown races: The Kentucky Derby, The Preakness Stakes, and The Belmont Stakes.

In July 2019, the House passed the U.S. Senator Joseph D. Tydings Memorial Prevent All Soring Tactics (PAST) Act, H.R. 693, by a vote of 333 to 96, with all Democrats and the majority of Republicans supporting the measure that would ban large, stacked shoes and ankle chains in the showring, create a modernized inspection program, and increase penalties for violators of the Horse Protection Act (HPA) of 1970. But, predicated on the political knowledge that the bill had no chance of moving at any point in the foreseeable future in the Senate, Animal Wellness Action and others worked with the Tennessee Walking Horse industry to forge a compromise that mirror key provisions of the PAST Act, and also included an additional ban on gruesome tail braces, the possession of mustard oil, croton oil, salicylic acid, and distraction devices the original PAST Act didn’t include.

Unfortunately, the Humane Society Legislative Fund, Humane Society of the U.S., American Horse Council, and American Veterinary Medical Association launched a misleading campaign that effectively prevented the compromise from being included in the year-end package. AVMA has long been in the forefront of the effort to defeat anti-horse slaughter legislation in the Congress, while HSUS has promoted mass round-ups of wild horses and burros throughout the West. Their efforts stymie a key opportunity to secure long-held ambitions by grassroots advocates working on the ground against soring, such as felony-level penalties for violators and bans on putting chains on the horses’ legs and the use of large, heavily weighted shoes in the show ring. Click here to see each of the support letters endorsing the PAST Act compromise.

Animal Wellness Action is a Washington, D.C.-based 501(c)(4) organization with a mission of helping animals by promoting legal standards forbidding cruelty. We champion causes that alleviate the suffering of companion animals, farm animals, and wildlife. We advocate for policies to stop dogfighting and cockfighting and other forms of malicious cruelty and to confront factory farming and other systemic forms of animal exploitation. To prevent cruelty, we promote enacting good public policies, and we work to enforce those policies. To enact good laws, we must elect good lawmakers, and that’s why we remind voters which candidates care about our issues and which ones don’t. We believe helping animals helps us all.

Horses For Life Foundation is an advocacy and education group dedicated to ending the slaughter of American horses, protecting wild horses and burros on public lands, and ending equine abuse and neglect through advocacy, public education, and legislative reform.

The Animal Wellness Foundation is a Los Angeles-based private charitable organization with a mission of helping animals by making veterinary care available to everyone with a pet, regardless of economic ability. We organize rescue efforts and medical services for dogs and cats in need and help homeless pets find a loving caregiver. We are advocates for getting veterinarians to the front lines of the animal welfare movement; promoting responsible pet ownership; and vaccinating animals against infectious diseases such as distemper. We also support policies that prevent animal cruelty and that alleviate suffering. We believe helping animals helps us all.

The Center for a Humane Economy (“the Center”) is a non-profit organization that focuses on influencing the conduct of corporations to forge a humane economic order. The first organization of its kind in the animal protection movement, the Center encourages businesses to honor their social responsibilities in a culture where consumers, investors, and other key stakeholders abhor cruelty and the degradation of the environment and embrace innovation as a means of eliminating both.