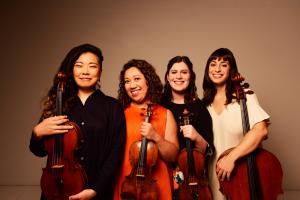 The program will include a 2016 composition by African-American singer/composer Rhiannon Giddens titled “At the Purchaser’s Option”. Also a North Carolina native, Giddens co-founded the Grammy Award-winning Carolina Chocolate Drops, and she has been nominated for six additional Grammys for her work as a soloist and collaborator. She was most recently nominated for her collaboration with multi-instrumentalist Francesco Turrisi, There Is No Other (2019). Giddens’s forthcoming album, They’re Calling Me Home, is a twelve-track album, recorded with Turrisi in Ireland during the recent lockdown; it speaks of the longing for the comfort of home as well as the metaphorical “call home” of death, which has been a tragic reality for so many during the COVID-19 crisis.

Giddens makes a psychological journey into America’s troubled past with the piece, from her album “Freedom Highway” and arranged for string quartet by Jacob Garchik. The song was inspired by a 19th-century advertisement Giddens found for a 22-year-old female slave whose baby was also available for sale (“at the purchaser’s option”). Giddens, a noted musical historian, imagines the interior world of the slave whose soul is out of reach to her captors.

“I am delighted to learn that Aizuri will be performing this arrangement of my song in my home state,” admits Giddens who is performing with Turrisi this week in Hamburg, Germany. “I wish I could be there with them and look forward to being back in Raleigh soon.”

Giddens was born in Greensboro and attended the North Carolina School of Science & Mathematics in Durham. She is scheduled to perform September 2 in Greensboro at Steven Tanger Center for Performing Arts.

Praised by The Washington Post for “captivating” performances that draw from its notable “meld of intellect, technique and emotions,” the Aizuri Quartet was awarded the Grand Prize and the CAG Management Prize at the 2018 M-Prize Chamber Arts Competition, along with top prizes at the 2017 Osaka International Chamber Music Competition in Japan, and the 2015 Wigmore Hall International String Quartet Competition in London. The Quartet’s debut album, Blueprinting, featuring new works written for the Aizuri Quartet by five American composers, was released by New Amsterdam Records and nominated for a 2019 Grammy Award.

Concerts will be held Sunday, August 8th at 1:00 and 3:00 in the museum’s SECU Auditorium. Seating is socially-distanced and the first concert will be filmed for a webcast available on the museum’s website at a later date. Tickets are $31 for adults and $17 for students and may be purchased online at www.ChamberMusicRaleigh.org or by calling 919.821.2030.