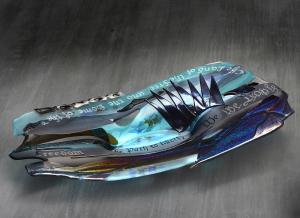 The first line of the national anthem and the first words WE THE PEOPLE of the American Constitution with respect for the individual human being The broken chains symbolize freedom from slavery and oppression. 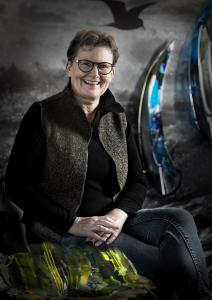 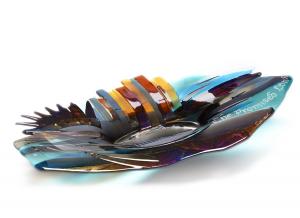 The history about the 300,000 Danes emigrated to America to the Promised land for a better life 200 years ago. 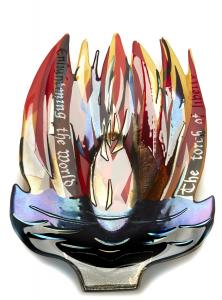 The torch, the flame of Hope, which the Statue of Liberty holds in her hand.

This dynamic infusion of light and color permeates both Agnethe’s self-inspired pieces, as well as her commissioned works.

A ‘no’ is just a postponement of a ‘yes.’ So, if you have a dream, then go for it. You are already on your way.”
— Agnethe Maagaard

NEW YORK, NY, USA, December 17, 2020 /EINPresswire.com/ — Rich are the seas and the skies of West Jutland in Denmark—even richer, perhaps, its history. Indeed, its treasures, from Denmark’s oldest town to UNESCO World Heritage Sites, are seemingly limitless. Among its very brightest gems, however, are the unique glassworks of master artist Agnethe Maagaard.

Indeed, her roots run deep in the Danish coast, with a family always determined to follow its dreams and work diligently to achieve them. For as long as she can remember, Agnethe’s aspirations always centered on artistically expressing herself and her potent ideas. When her determination first met the medium of glass twenty years ago, aesthetic alchemy occurred that has never stopped enriching the world. She describes her novel technique as such, “I paint with the fused glass and lay it up as brush strokes on my palette… I make the glass come alive and take nature into my mind and convert impressions to expressions.” In this way, each of her one-of-a-kind works is a lasting testament to the transformation of the abstract internal into the concrete external—manifest in infinitesimal light and color.

This dynamic infusion of light and color permeates both Agnethe’s self-inspired pieces, as well as her commissioned works. Take, for example, one of her favorite series—Liberty—a three-piece set that she designed for an exhibition in New York in 201. The seemingly infinite palette of “The Promised Land” not only arrests the spectator in the sublime, but it also connects the spirits of two lands by embodying the journey of Scandinavian emigrants to the New World of the United States, as represented by the seven spikes of the crown of the Statue of Liberty. On the other hand, a brilliant example of her commissioned work is that done for Fjellerup Church, which consisted of two windows that were specifically requested to speak of life’s journey from cradle to grave. While her choice of sunrise over ocean fishing and sunset over cultivated fields speaks to Agnethe’s ability to “tell histories with [her] glass art,” her balanced and precise execution speaks to her particular genius.

It is this very genius that has found recognition not only in her beloved country of Denmark but also throughout the world. In 2009, the Queen of Denmark, Queen Margrethe, and the Danish Crown Princess specially visited Maagaard Gallery in Bøvlingbjerg, where Agnethe presented them with a commemorative work, “The Land of Hills and Waves.” Internationally, Agnethe’s work has been exhibited in Chicago, New York, and Dubai, and she has designed several one-of-a-kind pieces for members of the Saudi Royal Family. In addition, Art Tour International Magazine has named her a Top 60 Master Artist, presenting her with the award at MAD, the Museum of Art and Design in New York City.

Never one to rest on her previous accomplishments, Agnethe has ambitious plans for the future. Not only does she plan to continue honing her art and its messages about our common dreams, but she also aims to begin work on several major projects in churches, hotels, and public institutions. There is little doubt that she will successfully reach all of these goals—and more. For, as she wisely reminds us, “A ‘no’ is just a postponement of a ‘yes.’ So, if you have a dream, then go for it. You are already on your way.”

Glass Art – The Clown Against Cancer