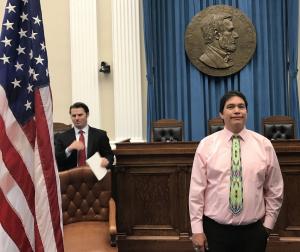 Vinton Hawley during the signing of Senate Bill 375 in 2017, which allowed for negotiations about the use and sale of medical marijuana on tribal lands in Nevada. 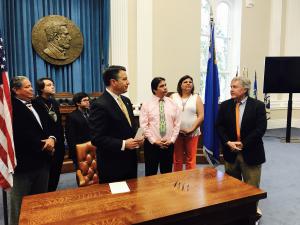 Gov. Brian Sandoval (Center) after the signing of Senate Bill 375.

Tribal service is more than a job to me, it’s more than a title. The position of Chairman allows me to be fully engaged with my tribal community and help shape a better future.”
— Vinton Hawley

RENO, NEVADA, UNITED STATES, December 18, 2020 /EINPresswire.com/ — Respected and accomplished Native leader and former Chairman of the Pyramid Lake Paiute Tribe (PLPT) Vinton Hawley is running for reelection in 2020. Hawley is known for his tribal leadership and advocacy work with an extensive public service record as the President of the Executive Board of the Inter-Tribal Council of Nevada, and as Chairman and Vice-Chairman of the National Indian Health Board. He has also served on the Secretary’s Tribal Advisory Committee and testified before Congress on health and funding, and before the Senate Committee of Indian Affairs.

Tribal government for the PLPT includes a Tribal Council of ten members who are elected biannually in December for two-year terms. After winning the Chairman seat in 2016, Hawley was defeated by Anthony J. Sampson, Sr. in the 2018 election. After a tumultuous year where the COVID-19 pandemic took center stage, Hawley decided it was time to return to tribal politics.

“It wasn’t an easy decision, but I believe candidates should possess a willingness to change. The willingness to become different and improve one’s current situation. This is a process and requires adaptation and the ability to harness progressive thinking towards an overall end goal,” stated Hawley, when asked why he’s running for reelection.

Throughout 2020, Nevada experienced a significant economic downturn and underfunded tribal communities were particularly hit as they struggled to contend with a public health crisis. The closure of reservations to the public limited income for many tribal businesses and further exposed how many residents live below the poverty line.

Hawley has long been a champion of exploring new channels for economic development. His approach is to bring both an open mind and critical eye to all opportunities. “We cannot be progressive if we lead in fear,” said Hawley. “In Nevada, there are opportunities to create revenue and sustainability for our people. There has been significant progress with the establishment of tribal cannabis operations, which have allowed us to fund cultural education and language preservation for our tribe and the next generation.”

During his time in office, Hawley worked with other Native policy groups to pass Nevada Senate Bill 375. This bill allowed the governor to negotiate compacts with tribal leaders and councils and permitted cross-jurisdictional commerce and regulatory compliance for cannabis businesses.

Hawley also led the charge for equal ballot access for Native voters in Washoe County and Mineral County. The voter discrimination lawsuit was settled, and an agreement was made between the counties and tribes to work together to establish voting sites in general elections. “I was really proud of how we were able to harness the voice of multiple tribal communities, now we have the recognition of our Tribal IDs as Real IDs, which are accepted at polling places and by the TSA,” explained Hawley.

As one of the forerunners in this year’s election, Hawley has made it to the final stage as a candidate. His campaign provides a clear strategy for action, including:

– To ensure the younger generation feels a part of the PLPT community by engaging with the 20 to 30 year-old age groups both on and off the reservations. This will ensure a long-lasting tribal continuity where all members understand their past for a more sustainable future.
– Prioritize the rebuilding of the PLPT Tribal Council and reunify membership to create a cohesive governing body.
– Reignite trust and wholeness as a community by creating transparency and open discussion. This will include opening meetings up to Tribal members, directing all staff to respond to incoming emails and calls within 72 hours, and ongoing honest communication.

“Tribal service is more than a job to me, it’s more than a title. The position of Chairman allows me to be fully engaged with my tribal community and help shape a better future. If elected, I am dedicated to devoting my full drive and commitment to PLPT membership and my dedication to Kooyooe Tuka’amu – YOU, US, WE, OUR, (as one),” stated Hawley.

The election for Tribal Chairman will take place from 6 a.m. to 6 p.m. on Saturday, December 26th, at the Nixon Gymnasium in Nixon, Nevada. Vinton Hawley will be running against Janet Dixon.