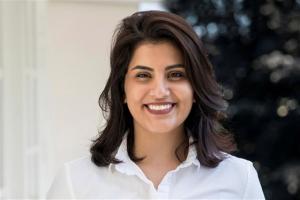 Too often, human rights defenders face violence and imprisonment, simply for taking a stand for equality and human rights. Loujain’s activism is not terrorism.”
— Lina Al-Hathloul, sister of Loujain

LONDON, UNITED KINGDOM, December 28, 2020 /EINPresswire.com/ — Loujain Al-Hathloul, a leading figure of the Saudi women’s rights movement, was detained in May 2018, and her case was transferred to the Specialised Criminal Court on 25 November 2020. Loujain’s sentence of five years and eight months in prison includes a suspension of two years and ten months in addition to the time already served since May 2018, meaning her release should be scheduled for March 2021.

Loujain is also required to serve three years probation – during which she could be arrested for any perceived illegal activity – and will be placed on a five-year travel ban.

According to a 2019 report by the American Bar Association, the Saudi Specialised Criminal Court has been used to target human rights activists and ‘routinely convicts individuals of terrorism charges without any meaningful evidence’.

On 15 May 2018, the Saudi government began a campaign of arrests of Saudi Women’s Human Rights Defenders. Whilst five of the women human rights defenders detained in 2018 have been provisionally released, Loujain Al-Hathloul, Nouf Abdulaziz, Samar Badawi, Nassima Al-Sadah, Mohammed Al-Bajadi, and Miyaa Al-Zahrani remain in detention.

During their detention, there have been multiple reports that the women human rights defenders have been tortured, including being electrocuted, waterboarded, and sexually assaulted.

A website set up by Loujain’s family reported that Saud al-Qahtani, a top royal adviser, was present several times when Loujain was tortured. Loujain told her family that sometimes al-Qahtani laughed at her and threatened to rape and kill her and throw her body into the sewage system.

The absurd charges against Loujain include calling for the end of the oppressive male guardianship system, contacting international organizations, speaking about her detention, supporting Saudi human rights movements, and applying for a job with the United Nations.

Speaking at the United Nations Human Rights Council in 2019, Lina Al-Hathloul, Loujain’s sister, said: “Loujain was imprisoned for promoting the implementation of the Vienna Declaration, which affirms the full and equal enjoyment by women of all human rights. Loujain did not get to drive in her hometown of Riyadh because she was arrested right before the Saudi government lifted the driving ban for women.

“Loujain did not get to travel without needing to get permission from her male guardian: a right she has fought for, not for herself, but for others.
People’s right to protect and promote the human rights of others is protected under international human rights law. Despite this, too often human rights defenders face violence and imprisonment, simply for taking a stand for equality and human rights. Loujain’s activism is not terrorism.”

Saudi Arabia must be held accountable for these human rights violations. Suad Abu Dayyeh from international women’s rights organization Equality Now, said: “Saudi Arabia is obligated to uphold international human rights standards and this includes ending the unlawful detainment and persecution of women’s rights activists. Peacefully advocating for gender equality must never be treated as a crime and Saudi Arabia’s citizens should be free to exercise their civil rights without fear of intimidation, torture, or arrest.”

The Coalition condemns today’s verdict and urges governments around the world, including the incoming Biden/Harris Administration, to hold Saudi Arabia accountable for their continued disregard for human rights and call for the immediate and unconditional release of Loujain and all Saudi Activists and Women’s Human Rights Defenders.

24 Nov – Saudi officials notified the family that Loujain’s trial would commence on Nov 25. Loujain’s parents are her legal representatives for the case and had one day to prepare for her trial.

25 Nov – Loujain’s case was transferred to the Specialised Criminal Court (known as the Terrorism Court) and the court said it would open an investigation with the prosecution regarding reports of torture. Loujain provided information about her hunger strike.

9 Dec – Saudi officials notified her family in the evening – with less than 24hrs notice – that Loujain’s first trial session at the Specialised Criminal Court would be the following day.

10 Dec – 1st Trial Session – The prosecution called for a maximum sentence for Loujain and changed the charges without permission or notification. All charges and changes are outlined here: https://www.loujainalhathloul.org/arrest-torture-charges#trial

14 Dec – 2nd Trial Session – Loujain appeared at the Specialised Criminal Court, handed in her defense, and was given evidence against her by the prosecution. This included tweets about her involvement in the #Women2Drive campaign; contacting Amnesty International to speak about the situation for activists in Saudi Arabia; and audio recordings of Loujain speaking about the male guardianship system.

16 Dec – 3rd Trial Session – The judge said for that first time that he would compare Loujain’s defense and the prosecutor’s response.

17 Dec – Criminal Court Hearing – During the hearing, Loujain and her father were briefed on a secret report about Loujain’s torture. The Public Prosecution denied the torture charges and said that prison cameras do not store photos for over 40 days.

21 Dec – 4th Trial Session – The SCC judge said they were waiting for the final torture report from the Criminal Court hearing and the next trial date was scheduled for Dec 24. A session at the criminal court regarding the torture investigation was set for Dec 22.

22 Dec – Criminal Court Hearing – During Loujain’s hearing, the judge gave her a secret report concluding the “investigation” regarding her torture. He asked her to give an immediate response and then sent his final report – in which he denied the torture – to the SCC.

24 Dec – 5th Trial Session – The SCC judge notified Loujain in court that the hearing was postponed to Dec 28.