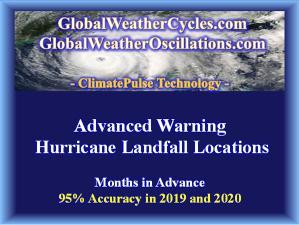 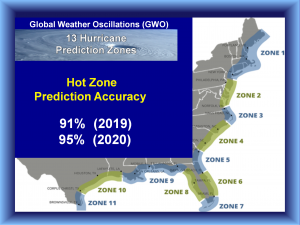 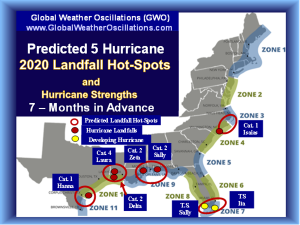 You should not simply focus on the predicted number of Atlantic Basin named storms. What is much more important is knowing how many United States landfalls there will be – and where they will occur”
— Professor David Dilley

TAMPA, FLORIDA, UNITED STATES, May 3, 2021 /EINPresswire.com/ — During the past five hurricane seasons, the Florida based hurricane prediction organization Global Weather Oscillations Inc. (GWO) (www.globalweatheroscillations.com) – predicted 6 months in advance the locations of all 15 hurricanes that made United States landfalls since 2016 – including the location and strength of all 6 United States hurricane landfalls last year (2020).

GWO has been producing accurate landfall prediction since 2009. GWO’s accuracy is near 90% during the very active United States landfall years from 2016 into 2020 season. GWO is the only organization that utilizes “ClimatePulse Technology” that tracks historical hurricane cycles and pinpoints future landfall locations months in advance.

GWO’s senior research scientist Professor David Dilley says that – although there will be fewer storms than last year’s record breaking 30 named storms – the 2021 season will again have a near 100% probability for destructive United States hurricane landfalls.

The 2021 predictions by Professor Dilley – calls for 17 named storms which is still well above the long-term average of 12 named storms. There will be 8 hurricanes and 3 to 4 major hurricanes in the Atlantic Basin. The United States will have 4 to 5 hurricane landfalls and 2 major impact hurricane landfalls. Professor Dilley says that due to the landfalls occurring in more densely populated areas – this season will likely be more dangerous and costly for the United States than last year.

Professor Dilley stresses – “You should not simply focus on the predicted number of Atlantic Basin named storms. What is much more important is knowing how many United States landfalls there will be – and where they will occur”. The ability to predict landfall locations in advance is the reason Global Weather Oscillations is the foremost organization when it comes to hurricane predictions.

During the hurricane season, Meteorologists David Dilley and Brad Sussman will conduct weekly 14-day outlook webinars, and daily tracking webinars when a hurricane is expected to form and influence any one of GWO’s 13 prediction zones. The webinars are interactive – the attendees can ask questions during and after the webinar.

Because GWO’s ClimatePulse Hurricane Tracking Technology already knows where the hurricane landfall hot spots are for the 2021 season, the interactive tracking webinars are extremely important to GWO’s clients by providing – more time to prepare – and more accurate path and strength predictions. Some of GWO’s past tracking webinars predicted 6 to 10 days in advance the true path and strength of Category 4 Laura in 2020, Category 4 Irma in 2017, Category 5 Michael in 2018, and Hurricane Dorian staying east of Florida and hitting North Carolina in 2019.

Professor Dilley says that “several factors are in place to produce another well above average hurricane season this year”. This includes a 72-year ClimatePulse Enhanced Hurricane Landfall Cycle that produces more United States landfalls – coupled with the lack of an El Niño that tends to subdue a hurricane season, and the continuance of warmer than normal water temperatures in the Gulf of Mexico and Atlantic.